My mom as Moira Kelly 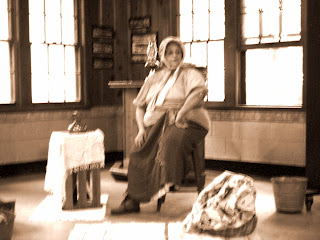 I was put in charge of finding a storyteller for a summer camp and I decided to ask my mom because a) I knew she'd do a smashing job of it and b) She needed something else to think about other than my stepfather's mental illness.

She "performed" last night for the first time and was wonderful. She "became" an Irish immigrant who'd settled in the Ozarks in the mid 1800s with accent and all. She's a huge history buff (very proud of her Irish heritage), an amatuer herbalist and a singer so she had her own natural talent, events and a sense of place to draw on for her character.

We had to move her performance inside because the weather took a turn for the worst and she couldn't use the chimney foundations at the ampitheater. But she recovered from the technical difficulties and held the attentions of thirty-five teenagers which was no small feat. Even the kids who were "too cool" to be impressed asked questions and laughed at her jokes and stories.

She goes back and gives four more of these performances before camp is up. I'm hoping this will encourage her to do this within our own community. She has too long under-rated her own talents (you ought to hear her sing . . .) The picture is a little blurry and speckled; I think my son's camera may have a problem he's not told me about yet (like maybe it got wet during a water fight at a teen council event)

Sounds great, Mary, and nice to know that the teenagers with their usually short attention span could enjoy themselves - hmmm, can you rustle up an audio file of her singing for us?

No Mom, my camera didn't get wet during that water fight. Keep in mind I left my camera next to you to keep my fears out of the way, which was difficult to do when I saw Samantha with that surprisingly large rock and a grin I hope I will never have to see again.

I'll see what I can do Scotty.

I stand corrected, Son. Now go do your homework or mow the lawn or clean your room or something.

to keep my fears out of the way
What on earth does that mean? :)