We're soaked here. Snow, Ice, and now rain. Creeks are running over banks and into the roads and the lake is level with the tops of many local boat docks. I'm not complaining. Not much anyway. This means a spring with plenty of Jonquils and Johnny-jump ups, Daisies (my personal favorites) and other wildflowers. And it's late February which means we're within shouting distance of budding trees, green grass, and cool days.

But I'm trying to maintain a walking schedule in all of this and it hasn't been easy. I have an old treadmill in my bedroom. Since we turned the satellite off this means no tv back there it's a lot harder to want to use it. I have exercise videos, but not only do I hate to use them (I want to strangle most of them about ten minutes into the routine), but trying to use them in our house with dogs and cats milling around trying to figure out if they can play too is not easy on the best of days. Oscar, the bloodhound, drops toys between my feet in hopes that I'll throw them for him, since I'm so clearly in need of something to do, Solomon follows me back and forth, jumping and dancing with me, and Ruby (the dachsund) makes dashes for my shoe laces. It's a bit like ballroom dancing with a ball and chain attached to your ankles. I spend a lot of time, shouting, "Excuse me!" "Move!" "Not now!" "Go lay down!" and "Oops! Sorry!" Consequently the animals get a lot more exercise out of Richard Simons videos than I do.

Maybe I'll just dig out my husband's raincoat, put on my shoes and a hat and sneak out anyway. I say sneak, because Solomon, my faithful walking companion, will think it's a great idea until about halfway through the walk when he'll begin to trudge instead of trot and then we'll both get wetter. Going without him means listening to indignant barks at the door as I scurry down the road. We have this lifelong agreement that walks are to be taken in the company of The Dog, always and this is a violation of contract.

The animals don't run this household, they just think they do. By the way, here are a few of the culprits. You've met Solomon (see the picture in my profile--he's 9), Scrappy (7), and Random (17 which makes her about 95 years old in people years). Now let me introduce you to the others.

This is troub-I mean Ruby. That blur in the background is her tail. If Ruby is awake, she's in motion. Ruby is about six months old, which makes her about 13 years old in teenage girl years. 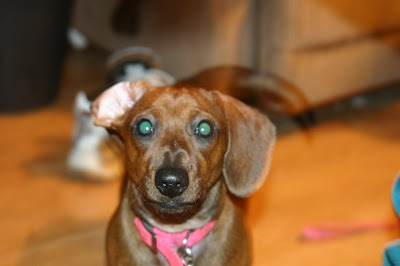 And this is Oscar, who would very much like his boy to put away the camera and bring him in out of the rain. Oscar is seven years old, which makes him about the same as a 50 year old man who is just sure his neighbors are aliens. 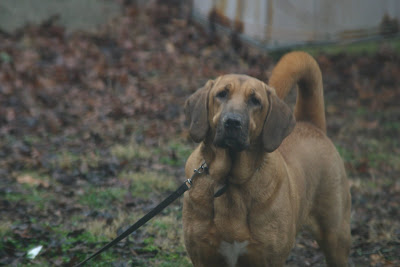 This is Molly who worries about everything. Molly's closing in on four years old. Think of her as a neurotic woman in her early thirties. 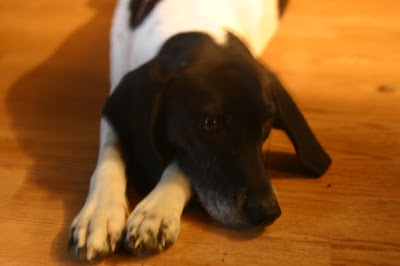 I didn't know whether to laugh or cry for the fact that you might have to 'sneak' out of the house in the cold and rain and snow.

No. But I would like to visit, just so I can remember why I chose to live in a place with seasons. :)
Good time to go down to the old swimmin' hole though, don't you think?

Unfortunately I didn't get to sneak anywhere (walking in the rain is kind of fun). About the time I logged off of here, it began thundering outside. I don't do thunder. So it will be me and the treadmill after I get Gary out the door to work. I believe I've mentioned it's been a really weird winter here.

Well, we have seasons too but I don't get snow and ice in this part of the country. What passes as 'cold' for me would probably seem mild to you but hey, it's all relative, I guess.

You don't do thunder? Does that include lightning? If so, the Northern Territory during the wet season is one place you might wanna avoid if you ever get a chance to visit here - I loved those tropical storms myself...

I've learned to appreciate thunder storms over the years, but walking in them is a different story.

My husband pointed out in no uncertain terms that you do too have seasons (though he said that you have them backwards :) ). I kind of knew that, I was actually thinking about Texas where I grew up. There are exactly two seasons there: Hot and humid and hot and rainy.

Hehe, then Texas is very much like the Northern Territory - it too, has the same two seasons (I spent 5 years up there during my military days and apart from acclimatising during the first year, I loved it).

We've got it backwards? Pffft!