As much of a software-geek as I am (I love trying new stuff--especially Betas), when it comes to writing, I prefer to keep things simple--just a word processing program, a few notes, me, and lots of coffee.

When I wrote Troubled_Waters, I was working off of notes and traveling on instinct, but I'd had six months of thinking about it before that so it was all but in place when I sat down to write it. The plot was fairly simple, even with two different POVs, so writing it was comparatively easy.

I'm going into the sequel with a big picture kind of goal, but no real specifics beyond some scattered notes. This time I don't have the luxury of relying on a "small world" as I did with the first book (most of the story took place in two locations). Also I've had to do a fair amount of research, and will be relying on more minor characters and a very present villain. This time the characters will be traveling and spending more time apart than together so I need a little clearer sense of direction. And while I hated the idea of using an outline per se, I've been moving reluctantly in that direction and wishing there was a better way.

Simon Haynes the author of the Hal the Spacejock and creator of YWriter, recommended a piece of software the other day that appears to be the answer to this quandary.

I'm very visual-kinetic by nature. I learn much more quickly if I'm relying on what I see as opposed to what I hear, and I'm on even more solid footing if there's a way to manipulate the information as well. This is probably why writing suits me so well and why I hate talking on the telephone (except for a very small handful of people-you few, you lucky few). So I should be a shoo-in for software that lets me map out what I'm doing, but I've tried outlining/mindmapping software before and just haven't seen the point behind something I can do freely in Word or on paper. Addi tonally, if I'm creating, I certainly don't want to waste my time and energy learning a lot of new commands or trying to figure out why what worked last time, won't work now (or where the software saved the freaking file, even though I told it to save it to the desktop). So if I'm going to use any piece of software other than a word processor for writing, it needs to be simple and direct and not get in the way of creating.

FreeMind fulfills this requirement. It's simple to use and satisfies my need to "see" what I'm doing. The advantage is that as I add elements to the plot I can see loose ends and recognize logic problems before I pass them by.

Because I'm celebrating a kid's birthday today (Joseph is thirteen, film at eleven), and am pressed for time, I snitched Simon's example from his site. As you can see, it lets you add branches, and then branches off of branches and this provides a truly visual path between events. It makes it easier to see outlining as part of the creative process as opposed to the thing that takes the fun out of it. 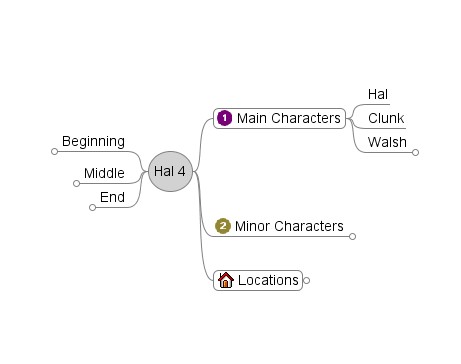 And a very happy birthday to Joseph from across the pond.

Thanks Scotty. I passed it along.