Last week Gary tilled our garden and the boys and I de-rocked it. In the Ozarks, this actually a laughable exercise in futility because there's no such thing as a garden without rocks here. Perhaps it is better expressed, "threw as many as we could find into the hill of rocks we dug out last year." I am convinced that we could form a really nice two foot high by ten foot long rock wall with our findings. 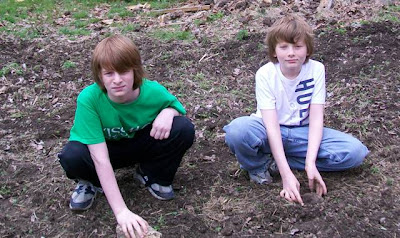 Friday evening Sam and I sat down and planned our respective gardens. One of the lessons I have up my sleeve is to teach him a bit about the value of record keeping without turning it into another chore I have to remind him to do. Explaining that I personally have a devil of a time remembering what I plant and where I planted it, not to mention when, I told him that writing this kind of thing down saves me a lot of guess work when seedlings begin to come up. He agreed and was only too happy to add his own notes to the page.

He makes me smile and puts me a little in awe of his ambitions, if you want the truth. For him, gardening isn't just about growing food. Sam sees a chance to start a home business (I did not see this coming). He wants to raise organic teas and sell them at the local farmer's market. I've suggested that he get his feet under him a little and learn about the work of growing the herbs and veggies first, but he's already talking about adding to his crop next year and is looking into how to package it. Me? I'm still very much a preschooler at heart. Within me lurks a hardy dose of wonder--the concept of pressing a seed into soil, watering it, praying over it and having those efforts (with a bit of help from the creator) produce a living, growing, fruit bearing plant continues to fascinate me. Who needs money? I have magic.

Last Saturday we planted seed and seedlings. Since most of Sam's gardening was done inside his box, he was done in less than an hour so he helped me with much larger job, which included mixing composted manure in with my top soil and forming raised beds on which to plant. This required opening forty pound bags and dumping them onto the area I'd marked out, then taking a shovel to turn it in and mix it thoroughly.

Though highly satisfying, this is the phase I used to metaphorically refer too as the "back breaking part" of gardening. Sadly, I've discovered that the "back breaking part" is not as much of a metaphor as it used to be. The notable pain in my lower back annoyed me so much that I decided to just to push through it and keep going long after the muscle spasms threatened immobility. I am not that old, nor am I that out of shape, I told myself fiercely. To my credit, I managed to get half the garden dug, which was all I really could do since it is still early in the season. I awoke Sunday in a fair amount of pain and spent much of the day being still (though I did manage to dig up one more bed and plant some seed that morning before Gary threatened to hog tie me--an idea I think he liked just a little too much). To his credit, he and Daniel went out that evening and covered my couple of sets of seedlings in preparation for the hard freeze, otherwise I probably would have crawled out there and continued.

A small, unexpected blessing has come my way within the last few days. A friend from church asked me if I'd like to have her old chain link dog kennel (she's the lady who gave Daniel his dachshund, Ruby). I said yes, thinking it might be a nice place to send the dogs when I want to clean house or when one of them seems especially restless. After I saw it, I determined that it would be a perfect frame for a homemade greenhouse, an item I've coveted for years. Gary wasn't at all sure it was a good idea until I showed him what I wanted, now he's all on board and ready to help put it together, which is a good thing, as I'm pretty sure I'll need him to do the grunt work.

Now that the cold snap is over Sam and I are anxious to get back out and finish planting. Tomorrow I'm going to go pick up my tomato plants and get them in the ground. I haven't quite worked out how I'm going to dig the rest of the garden without "breaking my back" again, but I think this time it's going to involve teenage boys and bribery (or punishment perhaps . . . there was the time Jeremiah mouthed off to me yesterday . . . ).
at April 07, 2009

Mary, I'm so excited for you! There's nothing like a garden and fresh veggies that you helped to sew and reap! My dear husband got our tiller fixed this weekend (Hurray!!) and now, hopefully, we to will have more than just a few patio tomatoes and peppers. (There are some potatoes growing out of my compost pile, bless them! One day I'm going to get serious about really growing potatoes! Have you seen what they're going for in the grocery stores lately? Crazy!

Blessing on your your plantings! And Sam's. I hope to hear (and see) more of the progress. He sounds like a very level-headed, industrious young man! I'm excited for him.

I am sure that you have many younger backs to break than your own - and good luck with it all growing well.

Not sure how you would use a doghouse for greens - unless it is a very large doghouse or perhaps seedlings only...

Thanks Jeanie--and I do, but I'd rather do it "mine own self".

Different kind of kennel Jeanie. :) This one is better than six feet tall and ten feet wide. We'll use PVC (plastic pipe) to create the frame work for the roof.

Best of luck with your yummy garden. I adore planting and making fresh gardens, it's such a 'new' treat for the soul.