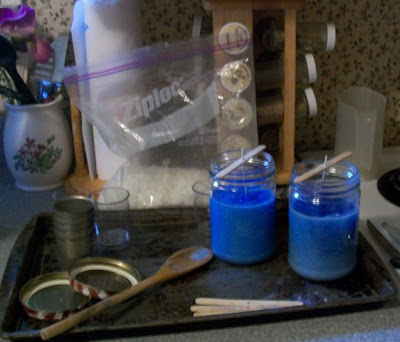 There's an X-files episode from the 7th season entitled "Small Things". I count it among my favorites because it's about a journey of discovery taken by Scully. In a matter of two days, she "coincidentally" crosses paths with a married man she'd had an affair with when she was very young (a huge mistake that she admitted to and tried to rectify by going across the country to get away from him), comes to grips with her own place in the universe, has a spiritual experience, sees her "guardian angel" for lack of a better term, and learns in not-so-many-words that her fate is unquestionably tied up with that of Mulder's. Ultimately she accepts the interconnectedness of body and soul and the events and decisions which affect both. The writers evoke an emotional response from the viewers, by making us aware of the small gestures, rhythmic beats of pencils, fingers drumming, window sashes thumping in the wind, and a strangely memorable sound track entitled "Speak to Me".

I watched this episode Friday and it left me thinking about the connections in my own life. I don't believe in coincidence. I do believe in spiritual connections among people and sometimes places. I do believe that all things work together to an end, that every decision is a learning experience that carries us to our next destination. I feel this way about my home here in the Ozarks. I've been fortunate enough to have a few friends that I've made this kind of connection with as well. Gary and I felt this from the beginning of our relationship. I also feel this way about writing, gardening, and, more recently, candle making.

I've spent the last couple of mornings digging irrigation ditches in my garden in hopes of controlling the size of my water bill, which is already fairly high, largely because my water company is greedy (what do you do when the economy is in a down turn and you're the biggest water company in SW Missouri? You raise the prices a 50%, of course. And why do you do this? Because people need water and you have it and they'll pay whatever you want to charge because of that). Ditch irrigation is not terribly efficient, but it's better than running a sprinkler for an hour every evening, and less expensive than setting in irrigation pipes (perhaps next year). I've gained a new appreciation for the Army Corp of Engineers. Not only is the work hard, but plotting the path of the water is no small feat.

It felt a bit godlike, turning on the hose and watching the water unfurl, racing down the various river beds, hesitating in the turns, splitting at the forks, meeting again on the otherside. Though there were places where I needed to make corrections, I was more than a little pleased that it worked. A few times I grabbed my hoe and pulled it through the dirt to smooth out a too steep slope or remove a rock, but for the most part, it ran as I'd planned. Seeing it all work together the way I'd planned (so few things do) was deeply satisfying. The connection between earth and water and my efforts resounded in me.

Everything I planted is growing. My lettuce, kohlrabi, peas, and some of the herbs are up. The tomatoes are growing taller, the cauliflower look healthy, and happy, if that's possible. Tiny plants are sprouting in Sam's raised bed and he gives me daily reports on their progress. He's already planting next year's garden in his head and talking about how much money he could make if he sells his herbs at the farmer's market. More than that, he's learning about how different elements work together to make things grow, what variables we can control, and how often we must just travel on faith when we plant something. Sometimes crops fail no matter how hard we try and that is the way of things.

In that same spirit, I sent of several letters to agents this week. Over the last few years, I must have pushed the submit button at least a hundred times and put stamps on dozens envelopes bound for ezines, magazines, and short story markets, but the intake of breath and tightness in my stomach never diminishes. It is a leap off a cliff every single time, but I'm willing to take for more reasons than just a wish to see my name in print.

A couple of days ago, my oldest sent me a copy of a short story he'd written (all the boys are natural storytellers and good writers, but Jeremiah demonstrates a passion for it). This morning I told him in good conscience that not only was it very good, but that he should do more of it, and that he should start thinking along the lines of trying to get published. He assured me that he's considering it and teased me about misery loving company.

Maybe, I said. But I'm going to ask you the same thing I asked myself sometime back. What else are you going to do with the stuff you're going to write anyway? How much pleasure does it bring you to put it in a drawer after you've finished it? How much more pleasure would it bring you to know that a few hundred people (at least) are going to enjoy your story and carry it around inside of them the way you do the stories you've read?

He nodded his head and said that I had a point.

Sometimes I think that all of this writing and trying to get published is not as much about becoming a published author myself (though I have no intention of quitting), but more about letting my children see that rejection isn't fatal and that sometimes you win. This whole writing, editing, and querying thing is like digging irrigation ditches in my garden, but maybe the fruit of my labors won't be so much what I harvest myself, but what my children have later on.
at April 25, 2009

The candles look great, and that's a hobby I have wanted to get into for a long time. You have inspired me to do so, thanks.

Regarding your question... your plugging on and continuation to submit is admirable and shows that you do beleive in your passion. This I greatly admire about you. I rec'd my first 'yes' for an online ezine this week, and was quite amazed at how much of a boost it actually gave me.

RH--Congratulations! Which ezine? I'd love to read it.

Hmmmm... Sounds like you've been practicing engineering without a license ;-)

Dennis--So do you feel godlike sometimes too?

lol - from a drawer stuffer here, I admire your bravado - and I see from your subsequent post there may be a tug on your line. Woo hoo.

Great post - I miss my garden. I have been in anticipation of a new one for far too long!!