What happened at my house yesterday 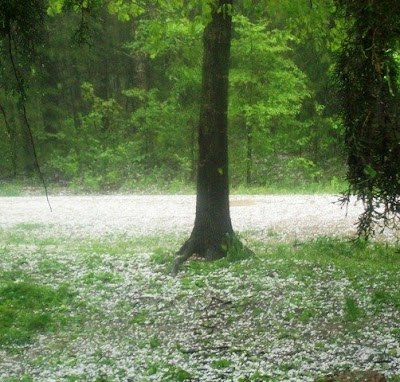 You are not looking at snow, nor is my yard covered in gravel. This is the hail that pounded my house and garden yesterday evening. Most of it was marble sized, but there were some golf balls mixed in as well. If you'll look closely at the mist covered road in the back ground, you'll see that it is not, in fact, a mist, but hail still falling. 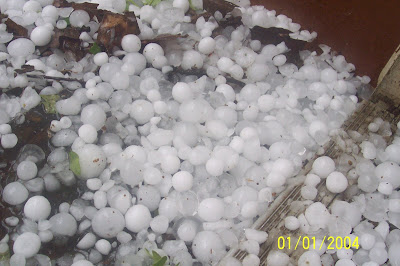 I believe this is the most spectacular hail storm I've ever witnessed and if it hadn't been for my worries about the garden, I probably would have given myself over to the moment much the way the boys did. The three older were fascinated, all grabbing their various digital cameras and taking dozens pictures. Daniel saved a few pieces in the freezer to show his Dad when he comes in. 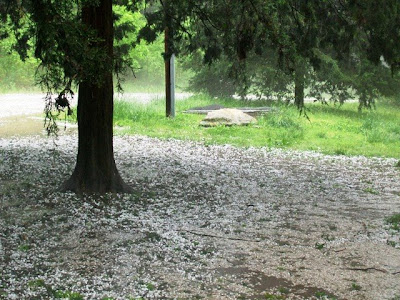 Sam and I just stood and peered at our garden, trying to will the hail to miss our plants and wincing at the thunderous pounding on the roof. As soon as it passed, we crept out and took in the damage. It wasn't as bad as it could have been. The tomato plants took the worst hits, with several broken branches and some of the cauliflower was flattened, but most of them looked like they might recover. I can't say much about the lettuce, the kohlrabi and the peas yet, but it doesn't look good.

Sam surveyed his herb garden, most of which was fine, but his Calendula and his sunflowers were in pretty bad shape. He frowned and touched the battered leaves.

"Such is the nature of farming," I told him. "We can replant some of it."

He nodded. "I know. But it still sucks big time."

Wow - amazing hail storm. I hope the damage to the garden was not too devastating.

Wow, that was some serious-sized hail, Mary - pity about the garden(s) but as you said, they can always be replanted.