Why it's so quiet around here

I've gone quiet for a number of reasons--all of them good. What time I haven't been devoting to wrapping up the school year has been spent working in the garden which has gone from this: 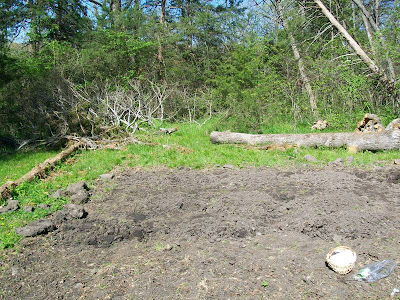 to this (the basket in the lower left corner is one I made in a basket weaving class a few years ago--it's vaguely football shaped, but it holds my seeds well): 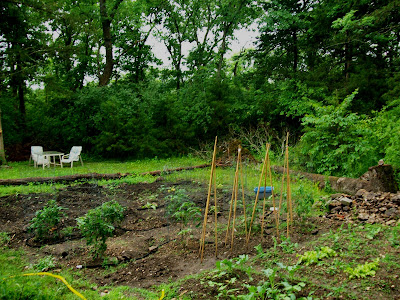 And recently I've added this:

Gardening is addicting work. I've asked Gary to till up more of the yard for me so I can plant flowers and maybe even roses. I've even been reading up on rock work, trying to determine if I can put that huge pile of rock you see on the back side of my garden to good use. I think a round bed in the center of the side yard would be cool. Further more I'm pretty sure it will keep me busy all summer.

My early mornings have been spent editing, not just Willows Blood, but Troubled_Waters. The agent who so kindly asked for the first few pages of TW ultimately rejected it, which I half-expected, but it did give me pause to consider why (why I expected it and why she rejected it). I've re-examined the first chapters of TW and concluded that they are simply too slow, which I think I've known all along but clung to because I liked them. But I've done some notable slashing and introduced a problem that I'd originally left until later on in the book. This makes the character immediately more interesting, but it also meant cutting my beloved boardroom scene and getting to the point a little sooner on some other issues. I'm nearly done with this work now and have a list of twenty-five more agents that I want to query when I'm done. I'm going all out with this round of letters--sending out as many as I can. Now that I'm confident of my querying skills I'm less concerned with tailoring each letter to each agent.

I've also been reading the Odd Thomas series by Dean Koontz, which is surprisingly consuming reading. I've never been a fan of Koontz (his early stuff is just awful), but these books are engaging and entertaining--enough so that I've read a fair amount of them to Gary and the boys.

Oh yeah. And I'm dieting, which makes me grumpy. I don't suppose you want to hear about low blood sugar and all that . . . No? Me either.

At night I've been falling into bed exhausted, but feeling good about myself. Which isn't an every day occurrence. I think I like this. I think I want to continue on like this.
at May 25, 2009

If you need some more rocks to go with yours, there is a plentiful supply in my garden :-D

I've considered taking up basket weaving, but for a completley different reason ;) Love the garden, I have my veggies growing on pots as I am short of space, so what you show here is luxury. I am drooling!

The garden looks nice. Something about growing things just makes you feel good, ya?

Sounds like you're making some wise tweaks and query decisions. That's the way to get there, Mary -- or so I believe.

I really enjoyed the Odd Thomas series too. Once I got past the notion that it was too much like the Sixth Sense. (Oh, and Elvis got on my nerves sometimes). Anyway. Very engaging reading.

Dennis-- I think I could till and dig the soil in this garden up every forty-eight hours for a year and would continue to find more rock, but thank you for the "gracious" offer. :)

rhubarb: Believe it or not, learning to weave baskets (badly) was part of a work oriented seminar. One of these days when I can afford it (read: get tired of my other hobbies) I want to try it again.

BJ: Thank you for stopping by. Growing things (especially food) is therapy for the soul and puts me back in touch with a part of myself I seem to lose when I'm not gardening regularly.

Ray: I hope so. I've been fretting about it quite a bit. Gary (first beta reader extraordinaire) insists the board room scene is necessary so I'm waffling. The problem is, it requires jumping around in the timeline and, as I get it, that's a no-no. Sigh . . .

It truly is addictive, isn't it?