And down they forgot as up they grew 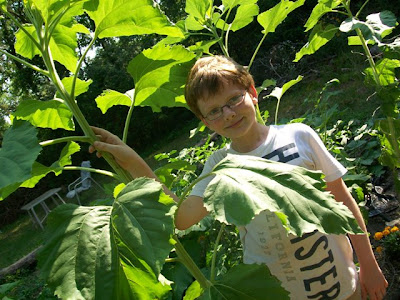 This evening my ten year old came to me with a six page short story he'd written entitled "King Black". It was broken into chapters with fun headings like "Black is the new White" and "Black is Back". Reading it was a humbling experience. All writing courses should be taught by fifth graders. They get storytelling in its purest form.

Here's what I learned. Hopefully you can use it too.

1) Stories should never be boring. Not ever. Something important should happen on the first page. There should always be an important conflict to resolve.

2) Everything the characters say and do should be about the story.

3) The villains' primary job is to be rotten. Everything they do or say should have a clear evil agenda.

4) Your book should have a really likeable good guy that readers can relate to. A hero who wants to avenge his father's death for instance. A hero with a lot to lose--like a wife and daughter.

5) Have a plan and work it with great abandon. Write fearlessly and with joy. Fifth graders don't care about critics and neither should you while you're telling the story.

6) Read the classics. They've withstood the test of time for a reason and it doesn't hurt to know why. Sam was clearly influenced by Revelations (You just can't get more exciting than Armageddon--I don't think God will mind that he borrowed the scene where the seven headed beast emerged from the sea to fight alongside Sam's evil king--it was surprisingly effective).

7) Give your characters a past. In Sam's case, the the evil went back three generations.

8) Make sure the ending is satisfying. It doesn't have to be happy, but it does have to tie up all the important loose ends and make the reader glad they spent time with your story.

9) Write what you know about and fabricate the rest. Sam knows Armageddon, he knows that bad guys may prosper, but good always wins, and about evil kings who raise the prices so high that all but the richest citizens of the kingdoms are having trouble providing for their families without resorting to stealing.

10) Be proud of yourself when you're finished. You have a reason to be. Don't worry about whether people think you're too young (or too old--which I've been fretting about) to become a published writer. It's okay to practice book signing. Optimism will carry you far.
at July 28, 2009

That sounds like a marvellous recipe for great writing!

I agree, creative and clever.