My long wished for greenhouse

It arrived on Friday. I could not wait to put it together, but the snow and rain kept me inside all weekend. This morning the weather was perfect and I was out the door the second the air was warm enough to work in . The frame was actually fairly easy to put together, though the directions were clearly written by someone whose native language was not English (Put anchors near feet to keep winding air from lifting over. If snow comes you must manually remove it to keep from bowing). The diagrams simplified it greatly. The only trouble I had was was sliding the fabric over the frame. It's seven feet high, seven feet wide, and fifteen feet long. At 5'4, I was simply not tall enough to manage the last part by myself. Gary was installing a new toilet  and the project wasn't going nearly as well mine was (why is it plumbing projects are never straightforward?), so I turned to Jeremiah who more or less willingly came out and helped. 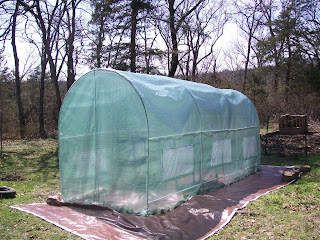 The front and inside (still very empty). I have since placed several jugs of water inside to serve as passive heat.  I obviously need more shelves. Honestly, it was bigger than I thought it would be. 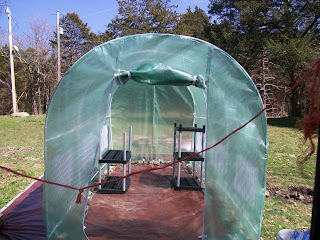 The other side. The tires you see in the foreground will help hold the fruit trees.  You can also see one of  the two holes we dug to place them in. The ground was too soupy to work with today so they are still in my closet. 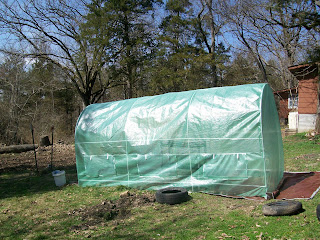 Oh yeah. The legendary rock wall that took all of last summer to build. I don't remember who it was who told me that the mortar would season and it wouldn't look quite as bad, but they were mostly right. Now that it's filled with dirt it doesn't seem to be quite as much of an eyesore. The next step is to build a walk way around it with rock and sand. The roses are in the middle; you can't see them against the mulch. 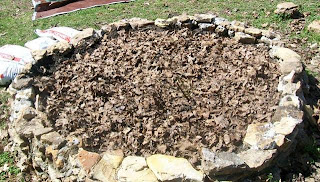 Tomorrow I'll plant the (dwarf) apple trees. They have me a little worried. It wasn't a cheap investment so I need them tor do well.  This isn't a simple matter of replanting seed. This is a tree!  More pictures to come of course.
at March 22, 2010

That is a lot of work. I hope your nursery trees are grown locally... they will stand a better chance that way. :)

Our apple trees are doing surprisingly well. Make sure though, if your trees were bought with any sort of a warranty that you keep your receipts and the information about the trees, so that you can get them replaced if necessary.

Oh. PS. I covet your greenhouse. You'll have lettuce next month probably.

Thanks Mrs C. They are Stark Bros, which isn't local, but the trees arrived in beautiful shape with lots of extra helps. We'll know soon if this is going to work or not. I am optimistic.

I planted my lettuce a week and a half ago and they are already up. Lettuce and spinach are very tolerant of cool temps. I will start my summer crops soon and have already moved the tomato and bell pepper seedlings out there.