Cheaper by the Dozen

I saw Cheaper by the Dozen today. No, not this one (which I like, but I don't find particularly admirable),  this one, the original, based on a true story of the Frank and Lillian Gilbreth family. The only thing the two movies have in common is that both couples have twelve children. The first couple has a household full of rude, mouthy kids who are the bane of the neighborhood and often in trouble in school. Though these parents loved their kids, they're too busy pursuing their own careers to pay attention to their children's manners and make sure that the quieter middle children aren't getting lost in the rush.  The second couple is also very busy, busy making sure their children are the best they can be--that they were respectful, polite gentlemen and ladies, happy, and living up to their potential. And, yet somehow, they too (in real life) were very, very successful (as in--have a permanent exhibit at the Smithsonian successful).


In real life, Frank (a man with little or no formal education beyond high school, who went on to become a famous management engineer) and Lillian (who got her PhD with a houseful of small children and went on to invent the electric mixer and the foot pedal trash can, wrote several books, and was woman of the year in 1948), raised eleven children (one passed away from diphtheria in the 1912) who ALL went on to graduate from college. Of those, two were authors, three were engineers, one was a teacher, another an importer/exporter, and so on.  And all the children attributed their successes to parents who taught them the value of education and thinking outside the proverbial box.


I don't think I'll ever see the first movie the same way now that I know the original family.

In other news, Sam left for camp this morning and I already miss him. We all do, actually. His dad called him to dinner by accident tonight and I actually came in from the garden this afternoon to ask him a question. Joseph said he's found himself looking for him as well. I'm sure he'll have a great time, but meanwhile the place he fills in our lives is notably empty.

Speaking of camp--Daniel returned on Saturday, sunburned, exhausted, and happy. He actually came home with email addresses and names this year.  Two years ago, I offered him money for every email address he came home with; any sign that he'd formed a speaking relationship with someone. He didn't even try. I teased him yesterday, "You do know that offer has expired, right?" He smiled (a rare, precious thing). "You mean, I collected twenty-five email addresses for nothing?"  I see their names popping up on his Facebook page now. I've even seen him initiate conversations (which is an even bigger deal than you know).

The trend continued this year; he continued to participate in the games; until last summer, he nearly always chose to stand off to the side.


Here he is on the challenge course: they're supposed to help one another over the wall. 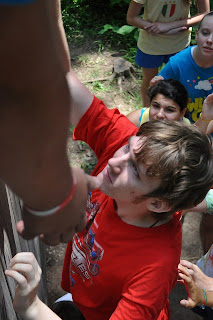 He said the hardest part was in letting them help him with something he thought would be easier by himself. (Interesting . . .) 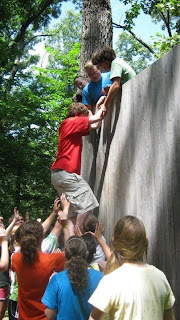 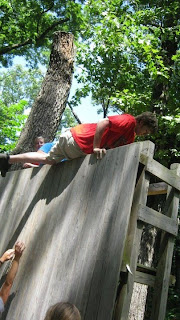 Having made it over, he turned to help pull others up. 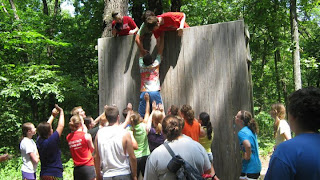 This is messy Olympics--which he's NEVER participated in before ( Cause it's messy right?). The object of this particular game is to break the egg riding in the top knot of the nylons they're wearing over their heads, using the foam noodles. The rest of the story that goes with this picture is that Daniel was running past a "really short" girl getting walloped by a bigger guy and distracted him so she could escape, allowing his own egg to be broken. Chivalry is far from dead as long as Daniel is around. 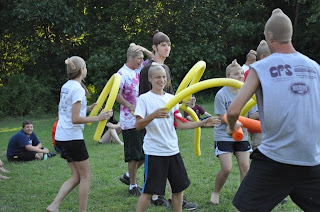 :) cute! I'm imagining the summer fun at your place with the garden and the camping.

How goes the book? Haven't heard an update on things there.

Those messy Olympics sound like a hoot - glad Daniel had a good time at camp.

I love the original 'Cheaper by the Dozen'. I remember laughing until I cried over the book as a child, and I loved the movie when I saw it (strangely, not until maybe 4 or 5 years ago).

Mrs C--the book is going slowly, but it's going. Thanks for asking. It is a busier than usual summer here. :)

Debby--I've got the book waiting for me at the library even as I type this. :)