My twenty-year old kid sister's life is in a state of transition. She has a pregnant girlfriend (at least I think she's her girlfriend--it seems to be complicated) and they need to move. She's asked us to dog sit until they can find another place that accepts dogs. I expect this to be a lengthy visit.

He's a lot like having a little kid around the house again--is into everything, harasses the cats and the older dogs endlessly, is ever hopeful that we, the humans, will forget ourselves and share our food, and has the biggest eyes I've ever seen.

Meet Zippo who is hoping the camera involves cookies 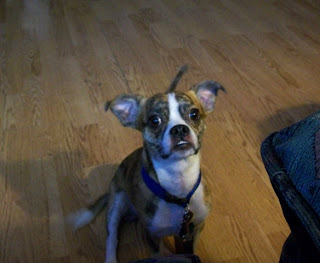 He's half Boston Terrier, one quarter chihuahua, and one quarter min-pin. As he's always been an only child, he thinks he's pretty important. Here he is explaining this to Oscar-- 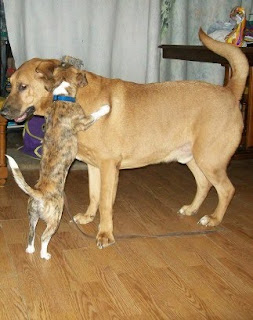 Here's Oscar explaining otherwise. There was also a bit of head locking, pummeling and sitting on. All very friendly of course, but the message was clear. 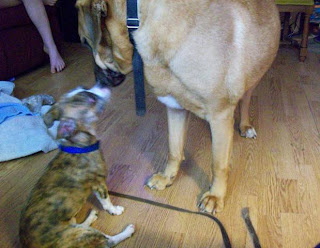 He also tried to explain this to Solomon. 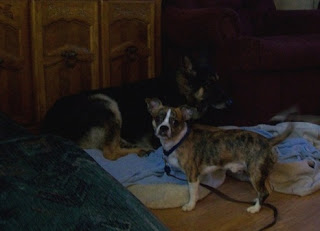 (I don't have a picture of what Solomon said. It's just as well)
Here he is thinking about his day (and the very concise conversation with Solomon). 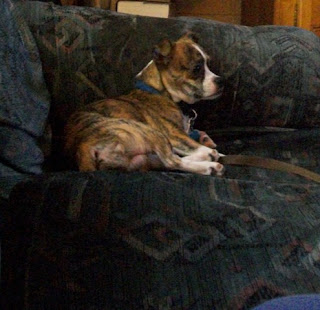 Once he quit trying to explain how he was the new boss, he and the other dogs had a grand time wrestling and playing chase. Elderly or not, Oscar is a 90lb puppy and loves to play so having a "kid" around is a great idea as far as he's concerned.

He's a happy little guy, loves to go for walks and play fetch, thinks Sam is just the coolest, and takes naps on my bed (which I kind of like). All in all, we're glad he's here for however long the visit is.

Oooh. Mary got a new dog.

"I feel like I went in search of a bathroom at o-dark thirty, took a wrong turn while half my brain was still getting out of bed, and wound up in an echo chamber I didn't even know I had." LOL....but that's almost how my whole life feels Mary ~ you're doing great!!! (i'll have to share that line with my hubby next time when trying to explain my befuddled bewilderment to him!) ~ eileen.

What a sweet little face he has :)
Bet you'll all be sad to see him return to his proper 'mum' ;)

Debby, I'd be lying if I said that I didn't hope so. However, she's found a place to live a lot sooner than we expected and she seems anxious to have him back, so we'll see.

Eileen! Thank you and I'm glad that line meant something to you.