This morning the three younger boys wore their t-shirts to church and stood in front of the congregation and said thank you to all the people who sponsored them (in return for the boys doing odd jobs for them--and there were lots and lots of folks who needed them this year).  I was pleasantly surprised to find that Joseph was a natural speaker; he casually accepted the microphone from the pastor and told the beaming crowd of elderly people about each of their camp experiences and what it meant to them. They got lots of hugs afterward; those odd jobs yielded more than camp money, they forged relationships between the boys and those they helped.

Sam returned from camp almost two weeks ago and I forgot to show off his pictures. This is due--in part--to the fact that there were few really good shots of him. When I complained about this to Sam, Joseph informed him, "You've got to learn to throw yourself in front of the person with the camera every time you see them. After a couple of days they kind of look for you because they know they can count on you to be doing something interesting."

Daniel nodded wisely. "That's what Jeremiah used to do too. I just try to make sure I walk past them once in a while." (Which probably explains why so many of the camp pictures of Daniel are of him just walking through the shot. I wonder if I can get him to try walking and smiling at the same time?)

Still, as I've mentioned in previous posts, the new photographer this year was really on the ball and I will be sure and let the director know that I really appreciated that she didn't just focus on the super photogenic, athletic kids that look like they should be on a magazine cover. (The pictures of next year's football star doing back flips off the diving board or the ones of the girl who could be Miss Teen USA modeling her tie-dyed t-shirts are great, but I didn't pay extra  so I could admire somebody else's kid--in better than half the pictures. And, yes, that's really happened).

The few shots the new photographer did get were great. Here's Sam trying archery (two bullseyes out of five arrows--not bad for a first try). 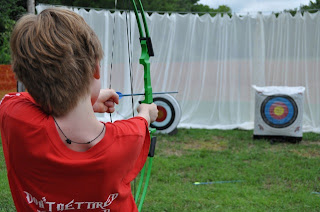 And boating (That's him in the back of the boat--in his tie-dyed t-shirt). I asked why he wasn't rowing and he looked uncomfortable and replied that  the other boys really wanted to try the oars. When I pressed him, he confessed that though he's doing notably better, at times water is still a worrisome thing, especially when he knows he can't touch the bottom. (Suddenly I understood his fear. I feel the same way in airplanes. We are both earthbound creatures in our own way, my youngest and I). 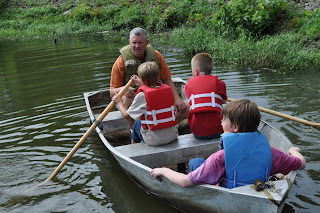 And here he is post-mud pit. He's the one on the left with a clean neck and hair and mud painted on his face. 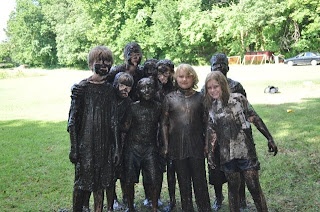 This is one is my favorite. This is Sam with an unguarded smile, like a kid who is having a grand time at camp. They are playing some kind of scramble game where they have to get to a seat or someone's lap at the blow of a whistle and resume singing a song (that obviously has gestures). 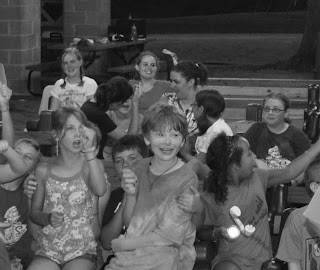 Jeremiah is off at camp this week, but he's there as a counselor and as part of the worship team (band).  He told me,  if he can afford the time off, he'd love to direct a camp some day.  The theme of this particular session is Christmas in July (he borrowed my rummage sale reindeer). I love the stories he comes home with every year, largely because they center, not around him, but around the kids he works with. A couple of years ago he had an inventive eight year old boy who liked to pretend to be different personalities (one of them female) throughout the day and sometimes late into the night (they had to offer to move the "female" personality into the girls' tent if she didn't go to sleep). The next year he had two boys with pronounced cases of ADhD--both of which requiring a huge amount of patience (a characteristic he had not yet acquired). Last year he over saw a cabin that included a young man with Asperger's and it went a long way toward helping  him understand and appreciate Daniel. I wonder when he'll figure out that he likes kids enough to work with them for a living?
at July 18, 2010

What a wonderful time they've had away at camp :)
Love the mud pit photo, sometimes I wish I could get that mucky again lol.