Gary and slipped away for our annual camping trip earlier this week. Well, slip away is probably not quite the word for it. I invited all the boys to come along, knowing full well that the only taker would be Sam and I was right. So this trip was less about "getting away" and more about building Sam up a little.

He's a little lost at present. His oldest brother is moving out next Friday and the two middle brothers are both heading to high school so he's feeling left behind. The truth is, that's exactly what's happening and there's little I can do about it.  They are older and they are entering territory he's not able to follow them into yet. Though we're enrolling him in a class at the local public school (keyboarding), he's going to be spending a lot more time with his parents and we're doing what we can to help him see it as advantageous.

We decided to go north to Bennett Springs National Park because a) we'd never been there before and b) It was within a couple of hours of home and we're on a budget. Bennett Springs was originally a small town whose main claim to fame in the 1800s was a water wheel grist mill that attracted farmers from miles around. They'd make a holiday of it, bringing their families along to camp and fish while their grain was ground.  Today it's one of the prettiest campgrounds we've ever been to with a few of the original buildings still standing, and a natural spring fed river running through it, kept well stocked with trout. There's a nice little restaurant, cabins, a motel, a park store, and a busy nature center.

We really didn't have any plan once we got there--perhaps do some fishing, cook over a fire, sleep in tents,  and hike a little (as my lousy knee permitted) so most of our decisions were made in the moment. This would have driven my agenda oriented oldest crazy, but my easy-going youngest was happy to take it at this pace. I brought along a book that I wanted to finish before school started ( I highly recommend The Last Child by John Hart . Excellent writing. Excruciatingly painful story at times, but well worth every moment of it) and, of course the camera. Outside of that, I had no goals.

While the men fished I sipped on a bottle of water, read, snapped pictures, wandered up and down the banks of the river, and people watched. It was too hot to do much else and the only way you're allowed in the water is if you're fishing, which I wasn't. (Trout fishing entails coordination and patience I do not possess). Still, I derived a surprising amount of pleasure from watching the guys. 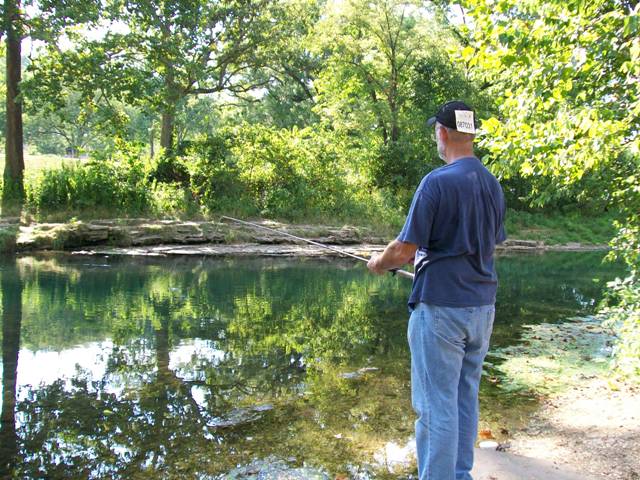 Discussing where and how to cast 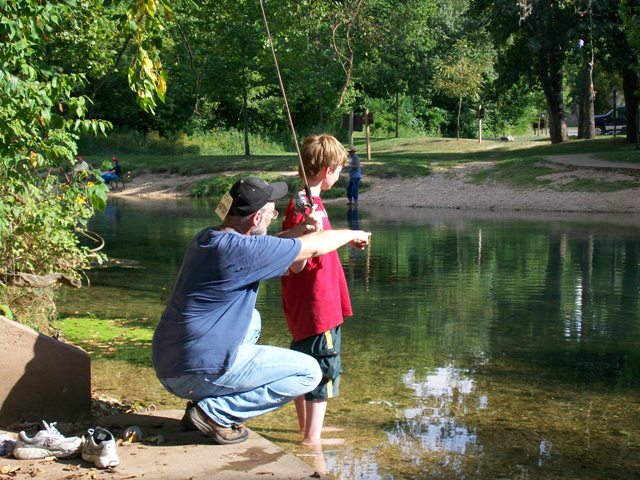 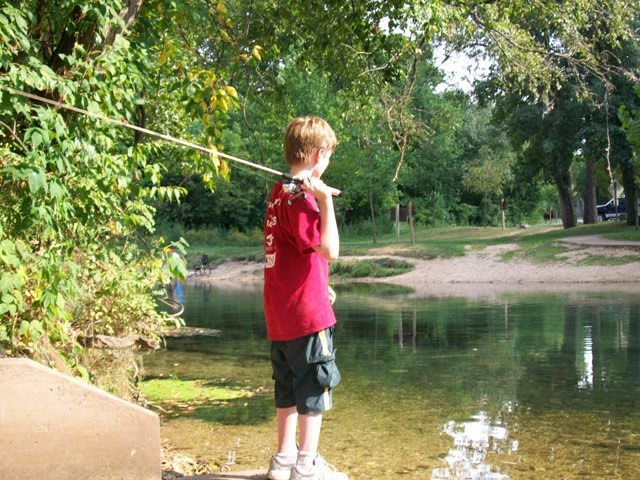 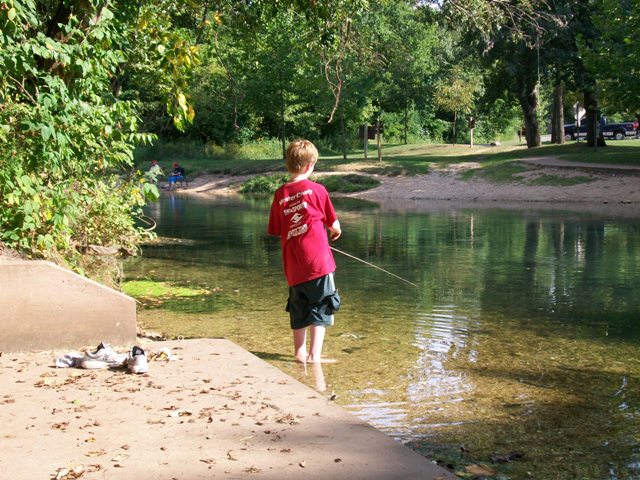 Got one' sorta (An algae eater!) 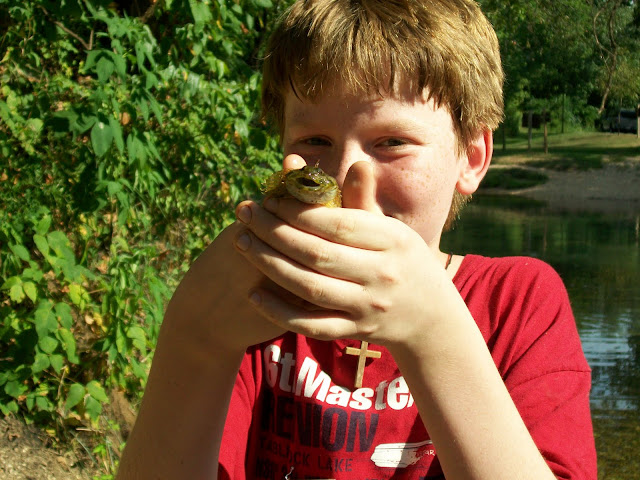 Empty handed, but there really was  one that got away 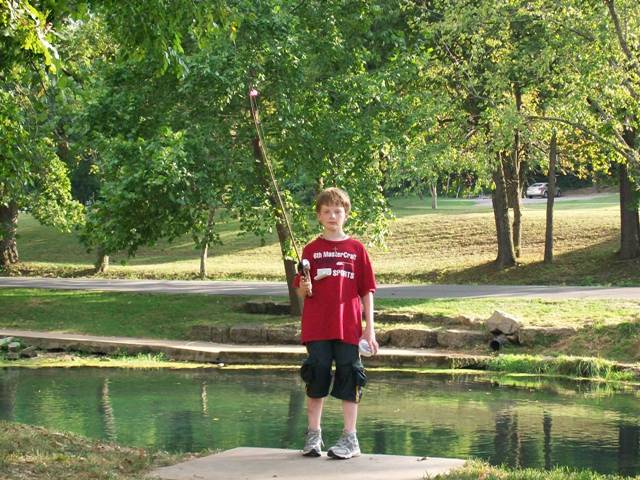 We hiked up the river where I became preoccupied with the dozens and dozens of fly fishermen in their waders, vests, and big hats, standing waist deep in the water casting their lines out in dancing, spinning arcs, before allowing the lure to light on the surface and dip just below. Over and over again, I saw men reel in flashing trout only to turn them loose to fight another day. If I could fish like that, with that grace and style, and cause no harm in the end, they'd probably never get me out of the river.


This gentleman coaxed his trout into freeing itself. He turned in circles with the fish as flipped back and forth, keeping the line slack until it loosened the hook and swam away. 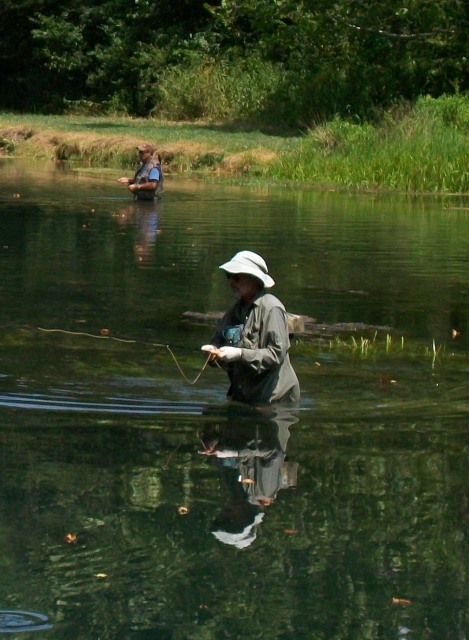 I could have watched him in all day,  (Gary said I was staring . . . ), but decided to take this surreptitious picture instead. This image does not do the picture in my mind justice. While there many fly fishermen out there that day, I sensed that this man was a master angler and completely in his element.


We passed a couple standing side by side as they cast. The wife murmured something about not getting any bites. "You've got to call them," said her husband. Amused (and obviously never having seen Sesame Street), she said, "Call them? How?" "Ancient Indian Chant," he replied. His voice rose across the water. "Heeerrrrre Fishy, fishy, fishy . . . " Gary, who once chanted this for me, glanced back at me and smiled. 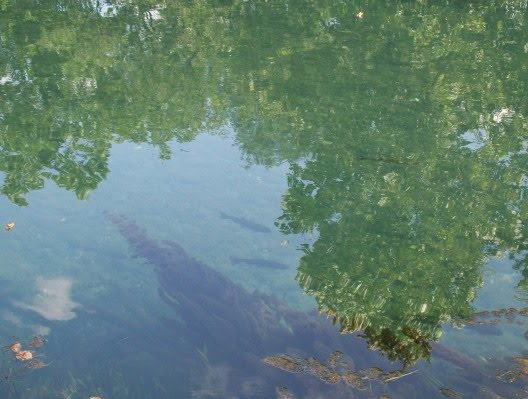 Sam made a friend of a lonely five year old boy who was camping up the road with his parents and two dogs in a motor home. I'm sure they were nice people, but we saw very little of them and rather a lot of their son. The little boy had a terrific imagination, telling us how his father was a man hunter, how he and his parents had lived in Australia with the natives and how he had once killed a man. Sam and Gary invited him to eat marshmallows with them and check out our tents which produced more stories and the proclamation that Sam was his best buddy. We packed up early on our last morning, with plans to get breakfast at the park restaurant before heading home and he appeared, munching on a cereal bar, making sad sounds and wishing he could go with us. I think by the time we left, Sam (his mother's child) was wishing he was like a stray dog that he could bring home, just because the kid seemed so darned alone.

At the restaurant, we allowed Sam to have a single cup of coffee (not usually allowed until you turn twelve in our house). He sipped it and talked happily about camping and fishing.

He liked his tent, liked listening to the tree frogs and the crickets. Liked cooking over a fire.

Yes, us too.
Could he go fishing in the cove when we got home?

Could he have a fishing pole for his birthday?

His brothers were going to wish they'd come too when he told them how much fun it was.

Yes, we thought so too.

He had a really good time, he said. Thanks for bringing him along.
He was very (very) welcome.
Maybe next year we could come back to Bennett Springs?
Maybe. If not, where ever we go, there will be fishing. Fair enough?
Big smile. Yes. That was fair enough.
A well spent few days.

Awww... Sam is growing up so much. It looks like such a peaceful trip. :)

What a lovely trip for you all, and Sam's special time with you both to himself :)

Glad you guys had a nice trip.

I've done some fishing in my time (catching a barramundi is an experience, I can tell ya) I've never been fly-fishing - if I ever make it back to your part of the world, tell Gary he's gonna HAVE TO take me fishing for trout.

So lovely and peaceful - I like the concept of fishing, just hate cleaning fish!!
:-)
BB

LOVE the pictures!! Is there any more prototypical way to build a relationship with a young soul? And to gain some peace and quiet for your own? Well done!

Yes He is, Mrs C. All too fast for my liking.

Ro-- He's getting so grown up, I'm glad he still wants to hang with us.

Scotty-I'll have to look up barramundi. I've told Gary and he says--come on over.