Stuff that makes me glow 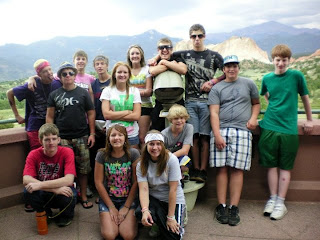 Joe and Daniel just returned from a ten day mission trip to Colorado. Before they left I gave them my standard speech (handed down from my Dad with the last name changed and embellished a little), which they can all recite from memory. Remember who you are and where you come from. You are a Paddock and that means that what you do reflects on the rest of us. If you go out there and behave badly, do sloppy work, or are hard to get along with, you'll make it harder for everyone else.  This is more important than you know. We live in a small town and our boys are visible members so the impression they leave people with matters.
They spent three days working in a national park near Colorado Springs--pulling weeds, digging trenches to help water drain away from the trails, and planting trees.  When they ran out of things to do there  Joe and several other kids who were younger than sixteen worked in a soup kitchen while Daniel and the other older teens did some volunteering for Habitat for Humanity. I am really pleased that the organizers of this event made sure that they got to help in a variety of settings.
As usual, they returned full of stories about what they saw and what they did. They didn't just work while they were there--they got to go white water rafting, hiked a little, and visited a couple of local attractions--their favorite being the natural history museum (they never outgrow dinosaurs). They loved the mountains and I have lots of scenery shots.
Gary picked them up at the drop off point yesterday. He was stopped two separate times by adult volunteers who made a point of telling him what good workers our boys are and how they were self-starters, stayed on task, and didn't complain or drag their heels when asked to do a hot, dirty job. One adult told Gary she was surprised at the number of kids there who didn't seem to understand that they were there to work. I suspect most of these would be middle schoolers and young teens who probably learned some important lessons from this trip.
We were eating dinner when Gary recited the compliments. I refrained from immediately patting them on the back. "Of course they worked hard," I said. "Was there any other way to do the job?"
All four boys shook their heads.
"I should never, ever get any reports back on you guys that reflect anything but that."
The older three all looked at Sam, who at eleven almost twelve, is just now coming into his own on this. I must say, I am so not worried about him. This particular boy rarely does anything halfway (I wish I could take credit for that, but this is simply who he is). Generally if Sam is given a job, he goes above and beyond what he's told to do. But his brothers (a couple of whom required extra lessons in doing jobs properly when younger) felt it was necessary to reinforce it.
His eyes widened. "Why are you all looking at me?"
"Because we were responsible for that reputation," said Daniel. "And you'd better not ruin it."
"That's right." Jeremiah said. "People ask us to come work for them because they know we'll do it right."
"So don't blow it," said Joe.
I had a good chuckle and I'm sure they wondered why, but I didn't bother to explain that they were reciting their own take on my Remember Who You Are speech. I went to tell them I was proud of them.
More than they know . . . Excuse me whilst I get misty-eyed will you?
at August 01, 2010

Nah - you're excused. I'm a little misty myself. I must jot down that speech.
:-)
BB

What a blessed family you have, and such great kids :)
Love the speech !

Aaaw - that's great, Mary - congrats to all the boys.

Oh gosh, things seem to be a bit fogged up around here as well. Sniffle x

Isn't this one aspect of parenthood you never realized would happen? Ours are now 28 + 31, and we've been proud of them since week ONE! Knowing how to give 'em principles, esp. thru our own behavior, and THEN TO TRUST & RESPECT THEM as PEOPLE.