It's Sunday morning. Jeremiah is home for the weekend. Gary is sleeping off a long night at work. It's a brief break in the action. It's cool outside, the coffee on my desk is warm, I'm ahead in my studies, and the household is quiet.

Yesterday Sam and I planted our fall crops. This year I put everything in the greenhouse, in part because the garden itself has become a wild woolly thing, a tangled mass of vines, dead and living, tomato plants with a few remaining blooms.  And in part because this should extend the season by at least a month, and possibly two. The drought hit us really hard and I stopped harvesting or weeding in mid-August (yes, I feel guilty about this) because no amount of watering would maintain the moisture content in the lower substrates and nothing was producing. Everything that came out of my soaker hoses was being wicked away by 101 degree temperatures in the unquenchable lower levels. Also, thirsty insects from all walks of life descended on my plants, devouring fruit and leaves a like, killing my second planting of pumpkins and squash before they even really got started.  Short of investing in a ton of pesticide (and you know how I feel about that as a beekeeper -to-be),  I was left feeling like Meryl Streep from Out of Africa as she waved away her workers who were trying (and failing) to dam up a small river in order to water her failing coffee bean crop.  Reluctantly acknowledging the futility of the effort by quoting something they'd told her in the beginning, she said, "Let it go. This water lives at Mombasa anyway."  One day, the boys and I stood back, wiping sweat out of our eyes, and looked at the sheer mass of cucumber beetles and squash bugs literally devouring plants. I found myself saying, with a faint Austrian accent, "Let them have it. It all belongs to them anyway." I looked around for Robert Redford to come whisk me away on his airplane and then remembered two key things A)I'm not Austrian. And B) I hate airplanes. So much for the romance of gardening.

This week, though, it rained on us. It rained on us a lot.  And plants are perking up, blooming here and there, so I am cautiously hopeful that there might be one more picking of something out there.

All in all, heartbreaks included, we had a good year. I have finally learned that each year will yield different rewards and this was NOT the year of the squash. However we got lots of green beans, tons and tons of tomatoes, bell peppers, and cucumbers. Oh, and the bird gourds. The bird gourds . . . 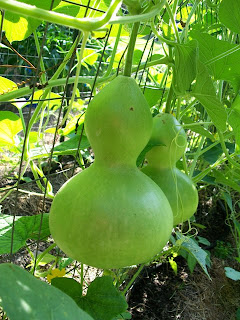 Well, they became these--- 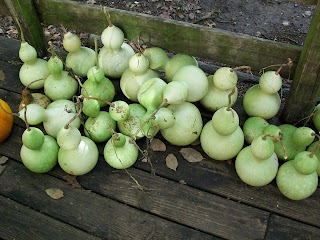 And there's more of them drying on the still dying vines. As I understand it, I can just plan on losing many of these during the drying time (six months). In fact, there's one already rotting near the left end. This gourd was an interesting plant, one I'm not sure I'll grow again as it was in sharp competition with every other plant in that end of the garden. I once commented to Gary (and on here, I think) that this particular plant would take over the world if it could figure out how. Interestingly, I ran across another gardener who said the exact same thing so I'm obviously not the only one who suspects it has an agenda. One of the plants left the garden and climbed at giant ragweed plant at one end, took over the fencing we strung for the pole beans on the other side, overwhelmed the watermelon and the other squash plants. The only plant that didn't seem dismayed by its presence was its slightly better behaved cousin, the pumpkin vine, who was caught up in its own struggle for survival (and gave us three pumpkins in the process).
We picked all the remaining tomatoes yesterday in hopes of starving out the pests that have been eating them. There are some blooms out there still, so tomorrow I'll just prune away the damaged parts of the plants and see if we can get another small picking. Meanwhile, today I'm going to try my hand at my mother's fried green tomato recipe and we'll eat them with broiled ocean perch and some vegetables.
Jeremiah came home on Friday, a day later than usual. I suspect this is a trend. He's made a couple of friends and seems to be looking out for his less socially adept roommate. The computer store that let him go last winter because they didn't have enough work now does and is talking about bringing back on as both an employee and as an intern. So we will definitely be seeing less of him after this. He is making As in everything except algebra and he has a B in that.

Joseph is finding his own footing in high school, loves French and seems to be excelling in the rest of his classes.

Remember the clean cut boy I sent off to school last month? 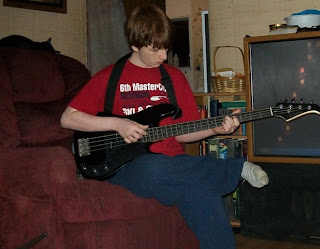 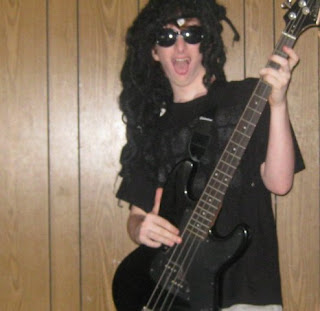 Okay, not really. What you're seeing in the second photo is quintessential Joe being the clown that he's always been at heart (note the tag on the wig sticking out just above his dark glasses). He's simply getting more secure with it. And he has an entourage of girls who think he's funny and sweet and decent. Which I expected. For his part, he thinks of them as friends; the one girl he likes (and has for a very long time), has graciously (because she too is a great kid) let him know that she's involved with someone else, but appreciates his attention and friendship. I was impressed with his frank expression of affection for her and the fact that he was upfront with her about it. Maybe, maybe all those talks about how boys should treat girls will pay off after all.
Daniel is gaining this kind of quiet, profound confidence in himself. He is making straight As as he did last year and is the darling of his teachers. All too often lately he's heard me fussing about this or that being broken or not working right and he's set out to fix it without my asking him to. The fixes in and of themselves are often astounding and it's almost worth the headaches just to see him work. He sees things no one else sees and problem solves in such an effortlessly "outside of the box" way, shrugging off complements because in his mind, this is just how one does things. Yesterday the hose on the vacuum cleaner was clogged. It is a really long hose with a peculiar arc in one end and is a real hassle to fix. He tried the standard-push the broom handle through method, and it wouldn't reach. So he found a stray marble somewhere and dropped it into the hose and listened for where it stopped. He then fetched a length of stiff wire from his dad's work bench, cut it to the length he needed, bent it around a little and pushed it up into the hose from the arced end until it struck the clog and worked it loose. He then handed me the hose back, pocketed the marble, and returned to his computer without comment. This might not sound unusual to you, but as it's always been with Daniel, it's not what he does so much as how he does it.  He has a girl or two who I suspect like him, but he either doesn't see it or doesn't know how to respond to it.
Sam is zooming through his school work and counting down the days until his twelfth birthday (October). He'll be allowed to go with his brothers on all three teen trips this year and he cannot wait. Remember the day I was worried about him spending alone last week because Gary had been assigned an extra day? Gary got to work only to have a supervisor tell him he wasn't really needed and he could go home if he wanted to. Ordinarily he'd have stayed, but knowing that Sam was at home alone, he chose to return.  When he came in the door at nine am, he found Sam hard at it over his school books. Sam didn't seem to understand my dismay over his working alone that day and as much as he was happy to see his dad, he didn't particularly need him. He's liking the afternoon classes at the public school, but feels a little older than a lot of the kids his age. In fact, what he's getting out of it is very different than what I sent him there for. "I can see why we homeschool now," he told me. "I like everybody up there, but I get a lot more done at home in an hour than they do in class." To his surprise, he likes P.E. a lot (I didn't ask him about this one. I simply enrolled him in it because I knew that without his brothers home during the day to allow him to hike with and bike ride with, he'd spend too much time doing too little physically.

Me? I am slowly finding the other adult students on campus. It's a little like sighting wildlife at the edge of a shadowy forest and wondering if you just saw what you think you saw, except that the wildlife is looking back at you thinking the same thing. It's the glimpse of gray hair and the lines around the eyes and lack of "Like, you know . . ." being used as a conversational filler that first gets your attention.  I can see the same double-take, and sometimes receive the occasional quick smile, but most of the time, they seem to be just as absorbed as I am in working out the shortest paths to their destinations.

I have turned in short papers and essays with longer ones due in the near future. I've got As on everything so far (including Geography). I am not taking this for granted, but much of the work is easier than I expected it to be. My advisor helped me plan the next couple of semesters. She also pointed out that I have a ton of psychology classes (enough for a minor at least and am just a couple of classes shy of a dual major) and suggested that I consider a Master's in Guidance and Counseling, which was one of the things I considered anyway. She was encouraging and supportive, which helped a lot, and also assured me that I can do a lot of my clinicals in schools that are local to me, which will help a great deal.
at September 12, 2010

Your life just sounds so *calm.*

Mrs C--my life is only calm from about four am until seven am. After that pandemonium resumes.

Scotty--All is well on the whole.