I earned this reputation in high school. The truth is, it was undeserved. I took the core courses I had to take, but otherwise there were lots of writing classes, literary courses of course, and a gardening class (they called it landscaping). Notice the lack of science and math? Not an accident. The adults in my life were content to let me slide by. Shame on them.

My first trip through college was pretty much a repeat of high school. I slid by, making a lot of Cs and Bs--pulling As in the classes I liked.  Shame on me.

I've not done my boys the same disservice. I ride their cases about homework.  I look at their grades regularly and point out potential problems. I make sure they take the "tough" classes. I talk about high standards and I make sure I'm walking the walk because they're watching. Gary feels pretty strongly about this as well. No one at home did much more than gripe at him when he made bad grades (which was often, because he frequently didn't bother to study unless he liked the class, at which point he made As with little effort). He tells the boys to think of school as their job right now and talks about how it can affect their futures.

They're taking it to heart. After a brief adjustment period in which Joseph learned that he was actually going to have to apply himself if he wanted those top scores, he's now on track. Though he's going to wind up with a lot of high Bs this quarter, the fact that he had to pull them up from Cs (one class from a D), says a lot about the lesson he learned when I confronted him. Daniel got a little sloppy early on in the semester, but I pointed it out and he corrected for it. Jeremiah is an A student in college, takes computers, science, and does not hesitate to take math classes, though he really hates them and struggles to make the grade. He does this because we've driven the importance of this home.

I don't know if this is clear from where you're sitting or not, but I tend to be very good at the things I set out to do because I give whatever I'm into my undivided attention. Sometimes this is to the detriment of other things in my life (usually housekeeping). An IQ test would reveal that I am only slightly above average. My learning curve is normal. My ability to focus on what's important to me is what saves me from mediocrity. That is as much self congratulations as you'll get from me in this particular blogging entry.

This week I had a final in a block class, a mid-term in another, a speech to give in another, and big test in yet another.  This is where I've been, by the way. Currently silence is golden. It means I've got my head down and I'm studying.

All but one of the tests were hard--well for me anyway.

The final was frustrating. The professor, who I've liked a great deal, has never taught this class before. In fact she's never taught a block class either. This did not become clear until the end when her communication became hazy concerning the final. She waited until the day before the test to reveal what the emphasis was going to be and better than half the test came from a book the class had spent little or no time with (as in--the week before the final--she asked us three general opinion based questions concerning the various viewpoints stated in it and she'd only assigned those specific sections the week before). It was a hard book, somewhat inaccessible, all about how our educational system is failing its students. Lots of names and conflicting opinions and philosophies. The other coursework was a breeze, fun even, lots of easy-enough assignments, guest speakers, a field trip, and a group project (I hate group projects).But the final was like she reached into a grab bag of tests and pulled out something from an advanced course. Thirty-three essay questions asking us for detailed lists of statistics and names and philosophies. I was not as blindsided as many, but did stagger a bit under the weight of it.

I got questions after class--We know you did well, Mary. What did you get on . . .  Though I had spent days pouring over the material, I was as baffled as anyone.When I stated this, they shook their heads. If you didn't do well, then we must have done worse (Though flattering, I very much doubt this). They're all hoping she grades on a curve. I do too, if you want the truth.

I'm pretty good at anticipating what the instructor is going to ask about and this test was no different. Even before she told us what was going to be on it, I had highlighted the sections I thought she might use and I was largely correct. But there was so much material in both the book (and so much of it abstract)  that I simply could not make it all stick, no matter how many times I went over it, how many word games I played with myself, or how many concrete images I attempted to connect the terms and stats to. I had studied all along, but I for three days I ate, slept, and dreamed this class. So when I didn't know, I guessed at things and covered it up with my good grasp of the  language of the field.  In other words, I faked it.  Sometime today I should know how well I managed. I am not anticipating anything higher than a B, which isn't the end of the world, as I have perfect scores in everything else. If I get a C, it will pull my grade down to a B and I'm going to be upset, but that isn't the end of the world either.

If nothing else, it was a good lesson for this future teacher in making sure that one's expectations of one's students are fair.


Subject: For the record . . .
I did not leave the last page of my test blank on purpose. I did not discover until fifteen minutes after I walked out of your class that I had missed it when another student asked me what I got on "the poem".

"Poem? What poem?" To my horror the fact that there would be one came rushing back to me.

I felt the need to share that.  I am up for extra credit opportunities and would be happy to write you an essay for another five points.


Subject: RE: For the record . . .
I am so sorry.  5 points should not really hurt anyones overall grade but I am sorry you missed it.

Thank you for replying. I'm primarily suffering from embarrassment.  So much for my cool "smart kid" image. :)

Subject: RE: For the record . . .
Your test was better than most even with the 5 points missing.  You can still be the cool smart kid. ;)
Thank you. Have a good weekend.

Notice how I did not ask what I made, as much as I wanted to. She was not obligated to reply to my email at all so I deeply appreciated her kindness.

The computer test was easy. So easy that I was shocked when I found that my final score was only a 94/100. I went back through the "correct" answers and discovered that two of the the instructor's answers conflicted mightily with the book--and even an earnest bit of googling just to be sure. This is an online class so I emailed him too. Correcting teachers isn't my favorite thing.  But he is a nice guy and a good instructor--immediately emailing a reply that indicated that he would give me the points after everyone else had taken it. This brings the grade up to a 98. I kind of wanted to dispute the other answer too, as it was vaguely worded in both the book and on the test, but decided that I'd pressed my luck enough.

The speech. I give usually give very good speeches. This was not one of them.  I hate this class.

So I'm off for the rest of the week--in theory. This is fall break. However I have to do some reading to do and Gary (who is on vacation this week) thought it would be nifty cool to invite someone to come stay with us for a couple of days. I am looking forward to the visit, I just wish I'd been asked first. I'm headed off to clean house and grocery shop. 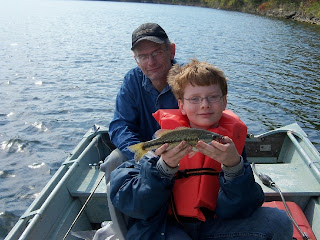 That blank last page...that sounds so 'me'.

You are still the smart kid, Mary, after all these years...

Nothing like catching your first fish, eh Sam? Congrats and belated b/day wishes.

Thanks Debby. Good to know I'm not alone. :)

Scotty--I'll tell him when he returns.

Thanks Debby. Good to know I'm not alone. :)

Scotty--I'll tell him when he returns.

I once did a whole exam, finished and was out the door really early - found out I had missed the half of the exam on the back of the pages - who prints exams both sides? I passed, but learned a far greater lesson!