On Saturday morning, I faced the fact that Solomon was done. In the previous days, he'd gotten lost (wandered more than three miles from home--which is so far from the faithful "nobody gets left behind" dog I know that I knew then that something had to be terribly wrong). and had numerous seizures which I could not control or stop. He was weak and tired and "not home" when he was conscious--he ate and drank and asked to go outside, but he couldn't find his way to the door. His back legs which had been weak, were failing him, seemingly all at once and he needed help getting to his feet.

I stayed up with him for two nights praying for a change, for a little more time.  I cried a lot.

On Friday evening I told the boys what had to be done: No more pain. No more seizures. No more confusion. They offered no argument, no "but what if"s.  Each retreated to handle their grief in their individual ways. Sam, as I expected, took it the hardest. But he echoed me after watching Solomon struggle through another seizure, "It will be a relief," he said.

I sat with him on Friday night, stroking his head, talking softly to him. The things I said to him are not for public consumption. They were the kinds of things one says to a dog who has been with one through joy and sadness. At one point, he grew restless, so I sang to him (you had to know the dog), he  placed his head in my lap, inhale my scent, sighed, and rested. That made the next thing I had to do much easier.

On Saturday morning, Gary carried him to the van.  We went to a trusted vet. It was quick. And then it was all over.

He is buried with his favorite ball in a marked grave near the garden where he used to lay and watch me work. I am not big on graves, as regular readers probably know, but Solomon earned this honor. Before the winter is up, he will have a head stone.

We stood around the site and said goodbye to him as a family, each offering up their own fond memories. Solomon liked music (We had to put him outside when we wanted to listen to music because he wanted to sing along), loved football (once he learned that it was legal to knock people down in order to get the ball, he became a passionate player), would do virtually anything for chicken, loved "hide and seek" (there was no hiding from that nose), never met a body of water he didn't like (though he hated it when we tried to to swim and would paw at us and grab at our clothes to get us to go back to shore), and he actually seemed to enjoy having his picture taken (I think because it so often involved cookies). He was loyal to a fault--a protector of all that was his, a clown, a playmate, and a quiet companion.

When Solomon was a puppy, I was told often, first by his vet, and then by family and friends, how I'd probably saved his life.All I did was agree to take on and nurse a sick puppy that nobody else wanted. That was easy. What they did not, could not understand was that, in actuality, he'd saved me. That was the extraordinary thing.

To say that I miss him does not even cover the full spectrum of the emotions I'm experiencing. 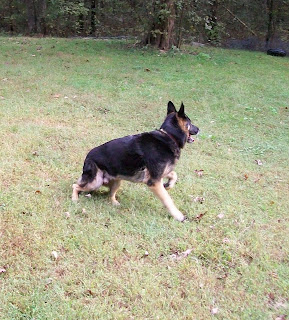 So many years, so many memories. Such love...real, deep, and so unconditional! Rest easy Solomon, well done.

My gosh that dog could smile.

Rest well Solomon, you were a good doggie. Hugs to your owner. x

Aaaw, shoot, Mary, sorry to hear the sad news - the post was moving; he was obviously a much-loved member of the family. My thoughts are with you all.

I'm really sorry to hear about Solomon. All dogs are special. Some are more special than the rest.

Mary, your post speaks of a long and powerfully positive relationship. I'm sorry for your loss, and happy for the great years you had with your canine companion. That is a wonderful and moving post. It makes me think we should be dealing with pet relationships on To Love, Honor, and Dismay. Well done!

It is an important thing to pause and consider the importance of one life to another. The dog was important.

I'm sorry too. I cried when I read it, but, I'm sorry. In my mind there was the face of another important dog.

RH--Yes he could. And he was a happy fellow. Thanks.

Scotty--He was at that. Thank you.

Andrew--Thank you for stopping by. I think the benefits of pets would be an excellent topic of discussion.

Debby-It's okay. I've seen Solmon's face superimposed over those of other dogs who passed away for days. Thank you.