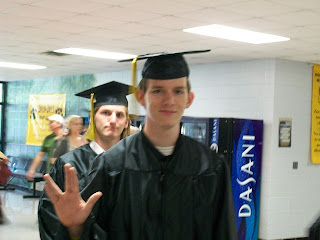 My second born graduated from high school yesterday. It is a momentous occasion under any circumstances, but for our family, and Daniel in particular, it is especially so.

For the relative newcomers to this blog, Daniel has Asperger's Syndrome which means that while he is extremely bright (gifted even) he faces some challenges as well.  He is obsessive over strange things (ask him about black holes sometime), and doesn't always know how to behave appropriately when situations call for face saving or sparing someone else's feelings. Childhood was often rocky and we spent a great deal of time trying to teach him what that neurotypical kids do naturally. For a lot of years he agonized over not having friends, but couldn't work out how to make them (even with intensive coaching from us and with kids his own age making it clear that they liked him). Even when the meltdowns of childhood and early adolescence and some his more bizarre behaviors were well behind us, it was as if there was a glass wall between Daniel and the world. He could see where he was supposed to be, but he couldn't work out how to get there.

Two years ago, Daniel, who I had expected to homeschool until college, chose to put himself in public high school. His explanation was that he was afraid that he was going to miss something if he didn't. It was with great misgivings that I said yes, but it shortly became clear that Daniel understood something about youth that we didn't. That it is fleeting and should be enjoyed as much as possible.

Daniel joined clubs, tried out for the baseball team, had a girlfriend (he broke it off with her), made straight As, won ribbons at art shows, went to senior prom (stag--but he went), went to football games and dances and learned how to study.

There were trouble spots and bad days and bad grades. An email from a teacher reporting that he'd had a melt down and she couldn't understand what he was so upset over (As it turned out, he'd cheated on a test and was trying to tell her so, but he was so upset he couldn't form the words). He learned the hard way about the consequence of not observing deadlines. And he learned that if you want something badly enough, you have to work for it--the world is not going to just give it to you, no matter how "special" you are. This was why he didn't make the baseball team--and the coach told him so (even though he demonstrated a natural ability). It concerned me that he didn't seem to have any friends, but I should have trusted Daniel on that one.

Daniel told me his name and added, "He's my friend. 'Real good guy." I have to agree.

I have a collection of pictures looking more at peace than I've ever seen. Like he's accomplished closure and completion and is ready to move on. My mother asked him what was next and he actually replied, "I'm going to get a job--probably at the grocery store." I say "actually" because until now he's had no plan at all and we've been worried that we were going to have to push him harder to get him to make some decisions.  We're hoping college is in his future, but for now I'm just going to bask in the smiles. 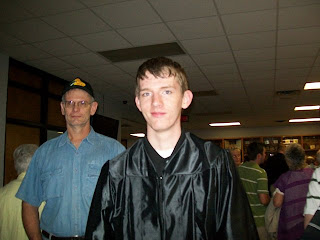 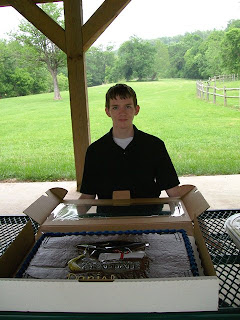 Gosh, what a journey for Daniel, and for his parents! Congratulations!

Scotty--Because of Daniel (for a while it was all he talked about), I have developed an interest in them too.