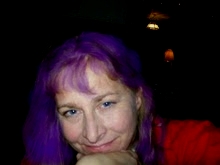 Deb from over at Life is Funny Like that Sometimes made a cute comment on my previous post concerning the hair color of the outward looking young lady on my blogger background. I stated that maybe I'd dye my hair purple too. Deb's joke was that unnatural hair colors make women look older. Though greatly amused, my thought was (and this is where I nearly always go with this kind of thing) "Older than what?" "Older than who?" And "Who the heck cares?"

It is obviously time for an announcement.

I don't often discuss my appearance here. I'm not comfortable with it, never have been, and it doesn't appear to be changing as I get older. So chances are good this topic won't come up for another year or two. But while I'm on the subject--I'm a normal enough female--I care about how I look enough to stand in my closet from time to time and announce that I have nothing to wear (meaning I need something new). And I do like hoop earrings and pretty hair clips. But I don't think of myself as especially attractive and am inclined to think more about what's comfortable than what's going to catch someone's eye.

My hair is one of the few things about my appearance that I actually like. This is probably because it has always been a major feature in how I define myself. My mom used to make me wear it short. When I left home one of the first things I did was grow it out, but I didn't choose to wear it long until I really worked out who I was (apart from who I'd been told I was supposed to be) in my late twenties. To my sheer delight, it also turned out to be more economical to wear it that way too. And, more than that, Gary liked it.

Sometime back I spotted the inevitable strands of gray that come with passing thirty-five. I'm blonde so it wasn't terribly noticeable to anyone but me for the first few years. For a while I bought hair color just as my mother did before me and hers did before her and dutifully started "washing it out". I hated it--it smelled bad, it was time consuming, messy, and expensive. But more than that it struck me as silly. Who was I fooling? I'm hiding the gray because . . .  Why? Because it might make me look older and the dye might make me look younger? What would I have to gain from that? Attention? From who? Respect? Again--from who?

Gary actually prefers my beauty (as he sees it) unadorned by "stuff" (no make up, no fingernail polish, and no dye) and always has, bless him. Other than my own, his is the only one whose opinion really matters. Cutting to the chase--Two years ago, I stopped "washing the gray out". I mentioned this to my mother--who is sixty-five and only just stopped dyeing hers just recently.  If I'd expected flack, I didn't get it.  She explained that the only reason she continued it as long as she had was because she was still raising small children when hers first appeared and got she tired of people telling her how beautiful her grandchildren were. After a while, it became a habit.

The gray is visible now. And I kind of like it. I've gotten use to the stricken looks from other women when I make that statement (I know what they're thinking when they look at me "Does she know how she looks?" and it's okay--I do look my age. And?). The comments are usually some grim approximation of "Not me! I'm going to go down fighting!"  and "It's all I've got left so I'm going to hang on to it as long as I can." I can appreciate those feelings and I have no criticisms of those who prefer to visit the Miss Clairol aisle. It's just not for me.

So  there you go. Deb--if I ever go back to dyeing my hair, it will because I've reached the conclusion that I'd like to experience having long purple locks. And mismatched socks(Ahem--On purpose).

I think I was a bit on the vain side when I was younger but as I hit my thirties and the hairline started to recede, I asked myself similar questions to you. So, I've long since become comfortable with my appearance and in many ways I'm glad I'm not a woman; there's so much pressure to attain these impossible beauty standards, isn't there?

I'm not ugly enough to have children run away screaming when they see me (I'd be worried then, lol) and on a few occasions I've even been told that I'm 'not bad' in a rough-around-the-edges kinda way.

But at the end of the day, it doesn't matter to me, really. While it's true that there's always a level of physical attraction in any relationship, that attraction can vary greatly for people, can't it?

And besides, my real beauty comes from within, so, if a woman couldn't take the time to see past the balding head and being a few pounds heavier than I'd like to be, then she'd miss out on looking into my blue eyes and seeing where the real beauty lies.

And that would be her loss, not mine.

Hi Scotty! There is A LOT of pressure on women to measure up to an impossible standard of youthful beauty.

And, from the pictures I've seen, and what I know of you--from one friend to another--I'd say you're better than "not bad". :)

Hmmm... did you really dye your hair or is that some kind of photo-editing effect? If you did -- major impressed. If not -- good joke.

Love the new template, btw. Very fantastical and intriguing. Kind of makes you want to write a story, no?

Ray--Gimp (freeware photo shop) is great. I'm not quite ready to go purple just yet. :)

And it does bring writing to mind (a specific character actually) which was exactly why I chose this background. I'm writing a lot this summer.

I still dye. I have done so since I was 16 and figure when I stop, there will be a very visible timeline for all to see within 2 weeks...

That being said, as a "geriatric mother", it does save me from being acknowledged as grandma - just as it saved me from being mouse brown when I wanted to be anything but.

My dream was green hair - but I was not prepared to bleach, which is apparently required for such a transformation.

I think my wv is quite apt - ininess - how much of my excuse is ininess, and how much outiness?