Where I've been and where I'll be 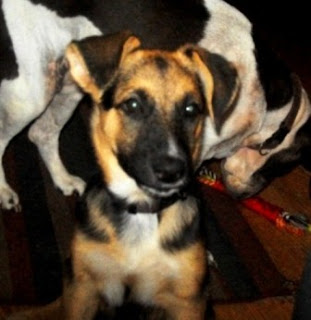 Busy with puppy training--house breaking, leash work, no-you-can't-chew-on-that-lessons. This eats ups a surprising amount of my day. Story is getting easier though--beginning to suspect that we mean it when we say no and she occasionally finds time in her busy schedule to cuddle with us.

I am writing a "short" story for my short fiction class. The process required for this is different--awkward and unnatural. Short fiction is a right brained thing for me (I start with a big picture and a character--wind it up and let it run and edit out the parts that aren't the story later); longer projects require some plotting. This instructor required an idea and a general sense of direction two weeks ahead of time. I very much like this instructor and am impressed by his approach to teaching--the problem with the change in approach is entirely mine. I am a superstitious writer--set in my ways and absolutely sure that my process is the best way. I was absolutely dead in the waters for two weeks without an idea in my head. Fortunately I met an elderly artist at the vet's office who unwittingly gave me an idea and a character to work with. But I've spent better than a week trying to find a way into it--writing openings and scrapping them (Have I mentioned that this approach is unnatural?), staring at the blank page and cussing. Finally, two days ago, I realized I was trying to tell the story from the wrong point of view. Once I discovered that, the opening was easy.

As of today it's moving forward--slowly, but it's getting there. The whole thing is due the 12th and it's clear that it's going to exceed the 6 page minimum. However in order to finish it and proof and polish it on time, I'm going to have to keep my head down this week. I'm not confident of this story so I've been relying on Gary's encouragement far more than I usually do. He tells me it's going to be a winner--maybe or maybe not one of my best pieces, but definitely solid.

The remaining remnant of my elementary ed major, an intro to special ed course, is a bit of a head ache, though I'm weathering it well enough. The instructor is nice, but a little disorganized and apparently doesn't understand how blackboard works. He is using someone else's course materials which means he doesn't always know what's in the quizzes so we are often presented with questions that are not covered by the assigned materials (book, outside readings, previous classes, etc). I have pointed this out to him and I am sure the other students have too (judging from his comments in emails). Sometimes he fixes this, sometimes he doesn't. When he does fix it, instead of giving us the points, he requires us to take the quiz over again with new questions (no added points, no extra credit--just to change the score of the test we've already taken).  Last week I had to take a 27 question quiz over the same material three times because of this. I was not happy. I have an A in the class, but it is a low one because I've gotten annoyed enough a couple of times to refuse to take it again (especially when I open the test up to find that he's left three questions in that don't belong there). At another point, answers were marked incorrect when they were quotes from the book and the "correct" answer was opposite what the book said. My suspicion is that he's never taught an online course before and thought it would be easier than it is. Apparently he's great in the classroom, just all thumbs online.

I am exercising five days a week now--including my stop and go walks with Story twice a day and the speed walks at the park, I'm up to three miles a day. Once Story is big enough to join us, Clancy, Story and I will be walking all three miles together in the national forest nearby. Last Thursday I actually bought small hand weights. I'm feeling stronger and my head is clear, but my body doesn't always cooperate. Ibuprofen is a vitamin, right?

So, Mary, are you going to share that assignment with us someday? Pretty please? :-)