What I'm doing instead of blogging---

Answer: Probably a lot of less constructive things. But I'm also consumed with gardening (been a tough year, thanks to the drought, but I'm still swinging --errr---watering and weeding, anyway).  This eats up three or four hours a day, but the tomatoes  and the squash are delicious and I can't wait for all the melons to ripen (tried new varieties this year--drought resistant--good thing, as it turns out). 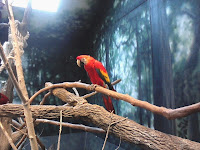 Gary and I've stayed close to home this year, except for transporting kids back and forth to jobs and camp. But we did take the opportunity to spend an extra night in Kansas City when we took Sam to the airport a couple of weeks ago. It was a nice mini-vacation--we went to the zoo and I saw my first polar bear up close and personal. I wanted to smuggle out one of their parrots to show to you, but Gary thought they might notice the squawking so we left it on its perch. You'll have to be satisfied with a picture.

Since we couldn't go anywhere, this seemed like a good time to stick my foot into the indie publishing pond. I released a short story collection entitled-- Sing on Amazon. It will be out on Smashwords (which will lead to Barnes and Nobles, Kobo, and some others) later on this week. The learning curve on this has been steep.


Then there was an entire week of re-learning website design:  Mary O Paddock (dot) com .  It has certainly changed since the last time I did this. Hopefully this site will grow more sophisticated over time, but for now it serves as a place for people to land when they google my name.

And because a full load of classes isn't nearly enough this fall, I've also started preparing A Dog Story for publication as well. It will be released October 8th (Sam's birthday). Tentative cover design below: 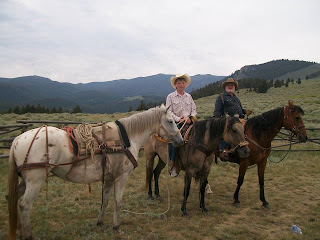 And for those of you who check into Sam's Blog and are wondering where he's gone and what he's doing: He's had a big summer: spent a week canoeing on the Niangua River, got to fly by himself on an airplane, and is currently in Montana with my dad doing a lot of this:

He called the other day, hinting that he'd like to stay--permanently (was told that the only thing he really misses is his pets).I guess if there were any real worries about my raising a "mama's boy" they've been put to rest. When he returns, he'll be starting high school and a new chapter in our lives (mine, as the mother who homeschooled for twenty-plus years) and his will begin.
at July 16, 2012