Excerpt from Speak --coming in December

December 4th
Since Don and I had our falling out (better put--since he royally screwed up), Emmett hasn't had anybody to play with. So I've been taking him to the small dog section of the dog park. Not that it's done any good. I sit on the bench reading while he just stands beside me staring disdainfully at the pack of little dogs running pell-mell across the grass. I feel like the mother of the weird kid on the playground.

From time to time, he asks to Go and I invariably tell him to stop it and go act like a damned dog.  He then stares at me hard and repeats his message. I then hold forth on the playtime he's missing out on.
Today, I'd given up on pointing out all the fun the other dogs were having and was absorbed in reading a book on my Kindle when Emmett issued a sharp bark.
A middle-aged woman with a slender golden retriever on a pink lead was standing nearby. The retriever was play-bowing in front of Emmett who was standing stiffly at my feet glaring at the dog as though she'd committed some social atrocity.
"Stop it," I told him. "How can anybody be mad at an animal that acts like that?"
He shot me an "it's a dog thing you wouldn't understand" look and continued to growl at the well-intentioned creature.

The woman, olive-skinned and dark-haired, was wearing what I like to call "professionally casual clothing" (someone who is failing to look as relaxed as they want to appear). She smiled at us and spoke to Emmett. "She is a little much, isn't she? Daisy. Get a hint. He doesn't want to play."
It registered that she and her dog were on the wrong side of the fence. "Is this the first time you've taken your dog to the park?"
"What was your first clue?" She beamed at me.
"You're in the wrong section of the park. The big dog part is over there." I pointed behind her to the fenced area with the large dogs running in it. "And your dog is still on the leash."
She glanced over her shoulder and rolled her eyes. "Oh god. Of course I am."
"It's okay. It's just that a lot of people worry about larger dogs playing too roughly and hurting the smaller ones. Are you a new dog owner too?"
She nodded slightly. "Yes. My mom recently passed away. My brother got the good china and I got Daisy."
"Joke's on him. Dogs are more fun than good china." I thought about my own mother and reminded myself to call her. Then I remembered my manners. "I'm sorry about your mom though."
"Thanks. I take it you're a new dog owner too?"
"Yeah. He was a—" I caught myself, thinking about what the judge said—" rescue."
Emmett had jumped up onto the bench where he continued to glare at the buoyant retriever who was now dancing around her owner's feet, tugging lightly on the line, trying to get closer to us.
"He doesn't seem anxious to leave your side."
"I don't think this is Emmett's idea of fun." I shrugged. "Which figures because it isn't mine either. I think I have the dog I deserve."
She chuckled. "Fellow introvert?"
"Yeah. And the great irony is that I'm a reporter. Not sure how that happened. What do you do?"
"I'm the head barista at a coffee shop over in Livingston," she said.
"So. Not a job for an introvert."
"It's not so bad. I don't have to be friendly, just polite. And it keeps a roof over my head." She lowered herself to the ground beside Daisy who'd stopped trying to make friends with Emmett and was sprawled on the grass.  For his part, Emmett had returned to glaring at the rest of the dogs and humans in the park.
The woman gestured toward him. "Is he very protective of you?"
"To say the least," I answered and forced myself to look like it didn't matter.
Emmett peered at me, his dark eyes meeting mine. I stroked him, assuring both of us that this was a sunny day and no bad guys were waiting in the bushes.
"Hey there, Emmett," the middle-aged barista said.
At the sound of his name, he turned toward her. There was a second's pause as they studied one another. Her eyes widened almost imperceptibly.
He turned back to me. He didn't say anything, but I could feel his apprehension.
She smiled. "He's a special little guy."
"Yes, he is." I picked him up and he placed his small head under my chin. I'm not sure who was comforting who.
"Well. I guess Daisy and I had better head back to our side of the fence," the woman said, her tone abruptly businesslike. She rose and collected the retriever's lead. Daisy stood up too, somehow seeming less friendly as well.
"Nice to meet you, Ellen," she said and retreated. I watched her as she walked back up the path. Without really knowing why, I turned to see if she went into the large dog's park.
She kept on walking.
Emmett and I exchanged looks. "Did you tell her my name?" I asked.
Emmett said nothing.


Note to self:  Don left a message today. It might be time to call him back. 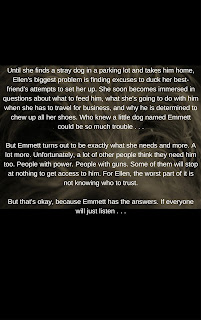