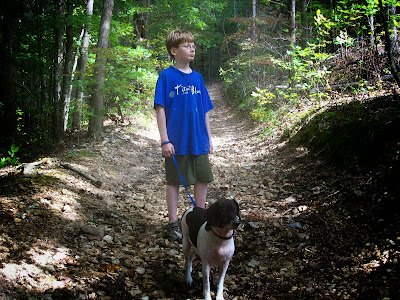 I have a shiny new letter ready to go out to agents and I'm getting anxious to mail it, but this time I want to be sure I'm sending off a truly finished work. After a few rejections last year I studied my first chapter closely and realized that it had a big problem. Fixing that meant fixing other things. This morning I cut a scene and have inserted another in its place. This should be the end of the edits.

Meanwhile I've been joined in the trenches by all the boys. Everyone, it seems, is writing something right now. It is both great encouragement and a little intimidating.

My youngest flopped down on the couch between his dad and me today and announced that he's written the second chapter of his new book. His newest "book" is entitled "The Way of the Wind" (Are you jealous of the title? Me too.)

"My book has an old woman in it," he says. "She's a hundred and seven years old and she's still living a full life."

"She makes a solution of orange juice, lemon peel, egg shells, ground up sunflower seeds, and pineapple shavings. And she puts on her deck every night before she goes to bed. She also wears it like perfume when she goes to town. It actually smells pretty good."

He has our undivided attention. "Why does she do that?"

"She believes it keeps Death away." Sam stood and wandered toward the door.

"So does it really work?" I asked.

"You'll have to read the book when I'm finished with it." He smiled and went outside to play.

There you have it--a nearly perfect synopsis out of the mouth of a (newly minted) eleven year old.

Sometimes I think I'm complicating this writing thing far too much.

I'm editing and growing really tired of it. Just when I think I'm done, I run across something else that simply has to be dealt with. Rewriting and amping up the secondary plot line means rewriting the intent of the lesser villain, which meant cutting an entire scene and rethinking the motivations of yet another character.

Confuse yet? So am I occasionally, but that's what outlines and notes are for.

Let me clarify. I gave my Troubled Waters two villains. One obvious one whose mission was to keep the tension high while I built the tensions with the less obvious one. Because I'm doing a "slight of hand" with the the less obvious bad guy, a lot of what he does is "off the page" (reported by other characters and two somewhat dark glimpses). So the obvious one must carry a fair amount of weight. In the first drafts, he didn't. After some rewrites, he does.

I'm chomping on the bit to start The Dotted Line, but I've committed to finishing this draft before moving on. November is just around the corner and NaNowrimo cometh nigh. All I've got to do is hang in there a little longer.

Meanwhile I think I'm going to take a peek at Sam's work. I think I might learn something.
at October 14, 2009

What a delightful mind that boy has! Don't you love watching what they are becoming?

OK, I'm intrigued - love the ideas behind the book (love the title too) - do internet friends get a sneak preview or no?

Awesome, Mary. Creative ideas like that will take him places.

How exciting, and clever too!

I love it!! GL on the submission too and keep us posted!