He never does this. Well, almost never.


Last Saturday came in from work this morning Gary and told me, "I almost picked up a dog."

The boys paused in their morning routine to stare. I stopped in the middle of mixing his coffee. "Seriously? Why?"

"I see dogs on the highway every day. They almost always look like they know where they're going--at least they don't seem hurt or confused. But this morning I saw a small shaggy dog laying by the highway out by Scenic View, panting. He looked scared--maybe hurt." Scenic view is outside of town about ten miles from us.

He had to have known what I'd say. "What do you want to do?"

He exhaled. "Get your shoes on."

By the time he would have gotten home and come in the door and we would have turned around to come back--it would have been twenty minutes. I really expected to find the little dog gone--or worse.

But he was almost exactly where Gary had seen him last, laying in the ditch, licking himself.

"Oh no. He's been hurt," said my husband. He pulled over. I opened the door, braced for blood and sadness. Instead, the small, matted beast immediately got up and came over to me. His tail wasn't wagging--he wasn't happy, just desperate to be somewhere else.

I carefully picked him up and placed him in the van. He was not hurt, and other than being thin and seriously, seriously dirty (did I mention he was dirty?) with so much hair that it was impossible to see his eyes, he looked to be in decent shape.

We brought him home, placed him in the bathroom (no extra kennels), and began making phone calls. First to the animal shelter in the next county, then to other dog people. I checked Craig's list--left a message there, left another on pet finder, slapped together an ad for the local bulletin board, sent an ad to the local paper. (We'll run the ad for free, for a week . . .)

An hour later, my mother called asking if the boys could help move some heavy furniture up at the church. She mentioned that she had some rummage sale stuff coming in that she needed some help with too. "There's some boxes, some  clothes, an old ping pong table, a BBQ grill and--hey you probably don't need another kennel, do you?"

Dear God. I wish you'd include me in the round table discussions when it affects my life . . .

He instantly zeroed in on Sam, liking the rest of us just fine, but making it clear that the boy was his preferred companion.

I spent Sunday getting to know him while Gary and the boys went to visit family.  He was quiet, except when he lost sight of me. He was confined to the kennel for the most part because he smelled terrible and, old furniture or not, I didn't want that smell to become a permanent part of our tapestry.

I had a big science test on Tuesday and I did not have time to bathe and clip this dog--who I started calling Dante almost immediately, because . . . that's his name. How do I know it's his name? Because he came to it the first time I used it and has refused all other titles (bestowed by boys who initially thought Dante was too hard to pronounce).

On Monday, we took him to a local groomer. I was braced to pay a huge amount of money.

Twenty-five dollars, She said cheerfully after she heard the dog's story.

Gary and I both looked down at the dirty mop in Gary's arms. "Umm . . . That doesn't seem like enough," Gary said.

She insisted. Two hours later we came back to get him. Gary gave her a tip, because that's what you do when someone performs a miracle as though it was an everyday feat.

Under all that hair was an absolutely beautiful Shih Tzu and for the first time we could see his lovely eyes.

On Wednesday, we took him to the vet to see if he had a chip (didn't expect him to, but we had to be sure). He didn't. I crossed paths with a breeder I have a speaking acquaintance with. She looked him over and assured me that he was definitely a Shih Tzu. Young, she said--no more than a year and probably closer to nine months.

He and Sam have become fast companions. I've told Sam to think of himself as the foster parent. That isn't a very satisfactory idea as far as he's concerned, but it is a reality.  He already has a dog--Molly, the Pointer.  They adore one another, but Molly doesn't exactly put out "I need you" vibes, which is one of Dante's biggest selling points as far as Sam is concerned.

Our suspicion is that he was dumped by a puppy mill (we live in the Puppy Mill Capital) as his front legs are bowed and this is considered a breed fault.  During his first few days with us we noted that he walked in small circles returning to the same three trees over and over to mark them.  He is unused to furniture and takes some coaxing to get him climb into a chair or couch. He does not know how to play, though Clancy is doing a great job of educating him.  He's housebreaking fast, though I expect it to take another couple of months. He's attempted to hike a leg a few times but responded nicely to correction. Little to no barking (nice change around here).

I'm sure you have already surmised this, but just in case it's not obvious--we are fast losing our hearts to this little dog, but I am already feeding plenty of canines.

Jeremiah has offered to help pay for his upkeep because he is watching his little brother fall in love with the dog. (Wow. Just wow . . .)

He likes cats and all the other dogs. Though jealous, Clancy likes having someone around to show the ropes.


I do not want to take him to the shelter (it has a waiting list anyway). It is a nice place--a no-kill operation with big indoor/outdoor pens for the dogs and a large indoor cattery.  But it is not a home and he would be better off going from home to another.  I will neuter him as soon as I can to aid in making him more appealing.

Oh--and just in case you need some encouragement-- 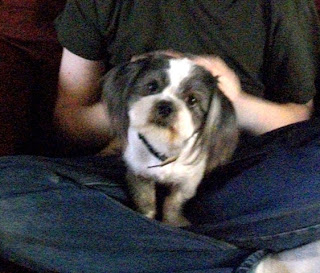 CUTE! Temptation is easy to say no to for us as two of our children are allergic to dogs. :)

Oh my gosh. He is just adorable. My husband would kill me. He does not like animals in the house. I don't like houses without animals. It's an impasse. He tolerated Buck for eight years. I'll give him eight dog free years. Then it's my turn again. Don't you think?