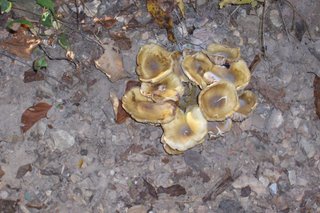 I'm trying to spark an interest in photography in my second born. The above picture is the result of some of his work. It's not bad for an early attempt. According to my reading these are called (really and truly) "Little Brown Mushrooms". You'd think that scientists could do better than that. They deserve something more along the lines of the "Missouri footstool" or something like that.

As you may have guessed from the picture, I took the boys on a hike with me today. This has become a favorite activity--an easy way for me to educate them and get a little exercise as well. Today we looked at tree rings, counting them together and estimating how old the tree was when it fell. We talked about the difference in the width of the rings and how trees age differently.

Each boy responds to the woods differently. Joseph (11) is full of questions, because Joseph is always full of questions. What's this, how far, can we eat that, how do you think . . . Joseph wants to understand. Daniel (14) is quiet, carries a walking stick and the camera looking for the ideal shot, pausing to snap pictures of shadows and tree branches, wild flowers, berries and rock outcroppings. Daniel wants to see what no one else does. Sam (almost 8) collects interesting rocks and acorns. He names the acorns and explains their personalities in detail. Sam wants it to be a story.

In an aside--my favorite moment was when Sam picked up one acorn, studied it for a second, then tossed it singing "I believe I can flyyyy" softly to himself. I asked him why he'd sung that, and he replied that it wasn't him but the acorn singing. He is quirky, is our Sam.

One small shadow on the experience: I saw a disturbing thing along the trail--a flag with a plat number on it. I've been watching out for signs of this this for several months. The federal government recently threatened to sell of sections of supposedly unused national forest (actually ordered the states to do it). I was among the millions who protested it by mail and in person. The state backed the feds down and the issue appeared to have been dropped. I've been concerned that the government is only waiting for us to get distracted before moving on with their plans and this new plat numbering worries me.

I've been muddled all day, thanks to last night's vicodin and am only just now clear-minded enough to compose a sentence. I'd make a lousy addict. Of note, my husband (who works nights and gets home around three am) brought home a friend named Jose, who was seven feet tall, had a shaved head and spoke very little english. I said hello to the both of them, kissed my husband and drifted back off to sleep. When I woke up a little later, I was surprised to hear my husband's truck pull in the driveway as I knew he was already home . . . him and his seven foot hispanic friend . . . I'm still wondering who I kissed.