I got through seventy or so pages this weekend. I'm down to the last hundred.

My second borne managed to successfully avoid the camera at camp this week. This is typical of him. I've warned him that if he doesn't start throwing himself in front of it from time to time, next year I'm going to start hiding in the trees like paparazzi and jump out in front of him, snapping shots and yelling questions.

My oldest son is still there, this week he's acting as a counselor. He took my threat to heart a couple of years ago and this picture is the result. Daniel tells me this game involved eggs on top of heads (held in place by the nylon) and lots people attempting to break them with foam swimming noodles. I'm sparing you the one with the yolk running down the side of his head. Charming, no? 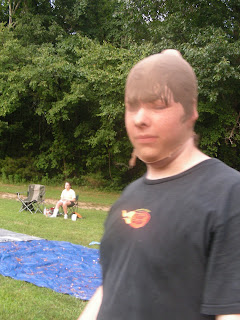 Daniel tells me they had a talent contest at camp this year. He wrote a song which all the guys from his cabin performed. He sang the song for us, shocking us all. I knew he could write a little, but he's actually pretty good at metered rhyme. Who knew. The performance was terrible, he said, but not as embarrassing a his older brother's "team" who all dressed in drag (no pictures of that--I am sooo disappointed) and did a lip-sync number. They took second place, beat out by a dance troupe. Yes, this was church camp, but it was Methodist Church camp . . .
at July 23, 2007

Hi Mary. I come to you by way of 'The Untitled Forum'. You gave me a very gracious rebuke tonight and I had to follow your link to see what kind of person you were.

I'm getting that you're a kid-raising, Christ-following, literature-loving, regular-Jane, just like me (except for the 'regular-Jane' part - I'm more of a 'regular-Joe').

Blog on, my friend.

Thanks for stopping by C.D.