April in the Ozarks

This morning, for the first time in a year, Solomon and I took a trip to Mark Twain National Forest. These hikes used to be a regular part of our routine, but I had to give them up when gas prices passed $4.00 a gallon. Now that prices are more reasonable, we'll hopefully be doing this more often.

I wasn't quite sure what to expect since this is also the first hike we've taken together since old Solomon's back legs began to fail him last May. The return route is almost entirely uphill and not easy, even for those of us who are not crippled. So I decided to keep it to a mile or so and rest as needed.

Since we weren't in a rush, I brought along the camera, hoping to spot a few wild flowers. I am no photographer, but the seasons pass so quickly that it's hard to believe they were really out there when it's snowy and cold, so I like to take pictures of them as I can and use them as therapy when I grow light deprived and suffer from cabin fever.

It's early spring here so there wasn't much color. Still, the Red Bud Tree (Cercis canadensis), a close cousin of the European Judas Tree, and often our first hint that winter is nearing its end, is out enforce. Confession: I only wish I'd taken this picture. After I accidentally deleted my copy (thinking I'd transported it to the computer), I sent Daniel, my sixteen year old, out in search of another shot and this is what he came back with. Trust me when I say that mine wasn't nearly this detailed. 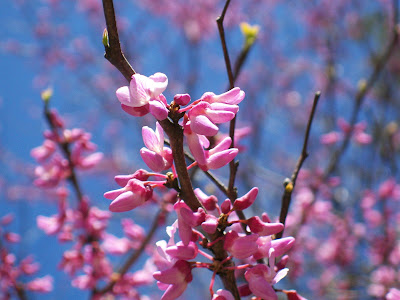 Also the Wild Plum (Prunus americana), which is often mistaken for Dogwood by passing motorists, is making a brave showing in spite of all the unexpected freezes. 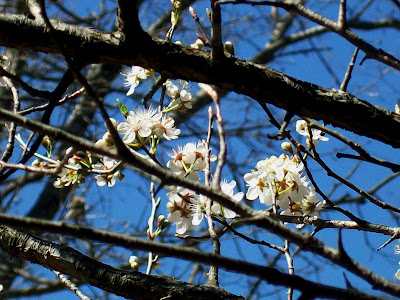 While there weren't much in the way of wild flowers yet, I did find some Sweet William (Phlox divaricata), aka Woodland Phlox, or Wild Blue Phlox, along the banks of a creek growing out of the cracks of a moss-covered bluff. 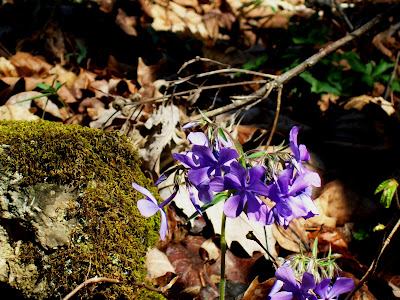 and, of course, Dandilions which, like God, are always with us. 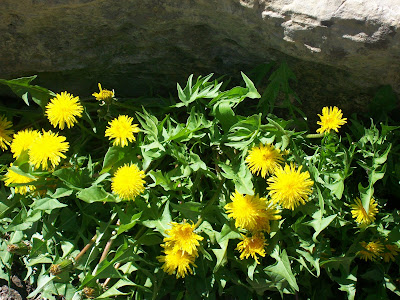 While I was "playing Wild Kingdom" as my husband likes to call these missions--Solomon was soaking his feet in the creek and very much wishing I'd hurry up. 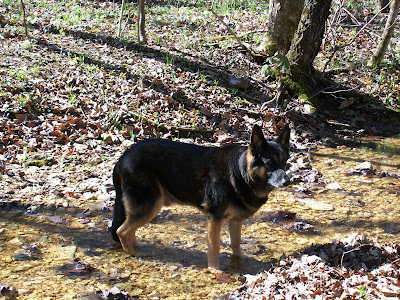 The last hill wasn't as hard for him as I expected it to be. Though I could tell he was tired because he stumbled a couple of times and he was quite ready to settle on a blanket in the back seat of the car, his tail was wagging when he jumped out later at the house. It's going to be harder than usual to slip off without him after this. 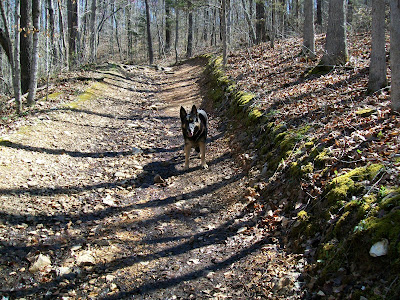 My own feet are sore and (were) wet and muddy from a slip in a creek, but it's a therapeutic sort of wet and muddy and I wouldn't trade it for gold or silver.
at April 03, 2009

I wish we had flowers...

Nice pictures. Spring is such a lovely reminder of new life, resurrection, if you will. It's a wonderful time of the year! Thanks for sharing!

Thanks for stopping by IOU.

Hang in there Debby. If it's here, it can't be too far away for you guys.