So I joined a writer's group

. . . and I'm still trying to make up my mind about it. Very nice people, all of them. One or two are unabashedly self-published; one older lady is a professional editor for a Christian publishing company and herself an author of one Christian novel. They were all intelligent and well read and actually pleased to hear that I write sci-fi. There are apparently other members that didn't attend this meeting tonight who write sci-fi as well and I look forward to meeting them.

My husband, God love him, keeps insisting I don't need this group--that I know more than they all do and am probably a better writer. I have my doubts about that (For one thing, I haven't seen their writing yet), but I appreciate the vote of confidence. In truth, I don't know that I "need" a writing group per se, but it's nice to carry on an in-person conversation with people who "get" what I'm talking about. That alone makes this worth the once or twice a month trip.

Tonight the lady editor gave a presentation on how to write good fiction. Most of her rules were pretty "beginnerish" stuff like what a good plot is made up of (conflict and resolution and relentlessly punishing your main character), but it never hurts to hear those statements again. I confess, though, I found myself arguing (inwardly) with some of the terribly important cardinal rules she presented and I'm glad no one read these to me before I wrote my first book. It would have made for a horribly muddled mess.

I especially took issue with the first piece of advice she gave--that one should always begin one's book with the main character. (This was mentioned several times, so it must be important to Christian fiction). I finally volunteered that my books often don't and that I'd seen this done numerous times with the purpose of establishing what the problem is going to be without involving the (at that moment) clueless main character. In fact, I'd say that safely 3/4s of the books I've read in recent months didn't follow this rule.

Well, yes, she agreed, the rules are meant to be flexible. And everyone agreed that there are exceptions.

Don't misunderstand me. I do believe there are rules to this story telling thing (number one being: never bore the reader) and I am well aware that the responsibility of the first chapter is to deliver on the the arduous task of hooking the reader/ agent/publisher. However, personally I think the rules look more like this (in no particular order):

In my opinion, beyond this, how you accomplish these is up to you and is dependent upon the genre you're writing for.

When I saw two women at the table writing down the woman's advice and one of them announced that she was going to have to go home and rewrite hers, it bothered me. While it was clear that no one at that table was going to insist that we all write the same way (far from it), it's disturbing to see less experienced, less confident writers immediately throw out what may or may not be good writing in favor of a silly set of arbitrary rules. This may be the draw back of groups like this, I'm not sure.

I think there's a lot of ways to get good at this writing thing--take classes, join groups, and practice, practice, practice. But I think the best thing a writer can do for themselves is read--read everything--but concentrate on the genre you're interested in. It only makes sense to let the market you're writing for teach you how to write for it.

Just my two cents worth.


Oh yeah. Daniel found a new use for his leaf blower today (His--as in he bought it at a rummage sale last summer and repaired it) and I just couldn't resist the urge to snap the shot. 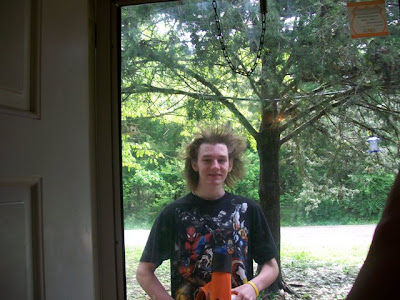 I remember joining a writing group once - it depends on the makeup of the group and what you want out of it as to how it will work.

I always wanted to just bounce ideas, but there are those who want to find the "right" way...