Some years ago, at an online writer's workshop, I met a man by the name of Ted Berryman. Over the next couple of years we exchanged a great many emails, detailing our lives, our hopes and dreams. Ted was a great source of support while I was writing my first book, his encouraging notes went a long way toward cheering me across the finish line. I enjoyed hearing about his grown children, grand kids, his friends, his dog, and his earthy home in the mountains in California.

Ted wasn't exactly a writer, though he did write and publish one short story during that period of time. No, Ted was (exactly) a carpenter and (more exactly) an artist. Sometimes he would refer to this project or that--a metal sculpture, a spiral staircase or two, sometimes working in wood, sometimes in stone. Often he talked about the house he lived in and the renovations he was making (an outside shower surrounded by flowers, a hand carved sink, etc). With his detailed descriptions, it wan't hard to picture his standing on a mountain top outside of a cabin surrounded by flowers in raised beds, looking across a valley dotted with mesquite and golden grasses covered by a blue sky polished to a high desert gloss.

As time went on our lives changed. I went to work and it was all I could do just to keep up with my very real and present life. Ted had his hands full as well so our emails grew fewer and further apart and finally stopped. Over time we both changed email addresses. Though I had little hope of ever hearing from him again I often thought about him and wondered where he was and what he was up to. It didn't "feel" like the friendship was over with, if that makes sense to you, like there was some unfinished big of business, though I couldn't (still can't) tell you why.

To my complete surprise, a couple of months ago, after five years or so of silence, a familiar name appeared in my spam box. I found it in the early dawn hours while taking my first sip of coffee. At first I thought it was just junk (I hate it when spammers use familiar names, don't you?) and was going to pass it by, but something about the absence of a title made me decide to take the risk and click on it (Ted often titled his emails "No Subject"). I nearly choked on my toast when it actually turned out to be him.

It didn't take us long to renew our friendship. Funny how some relationships are like that--the paths, though a little over grown from lack of use, still wind and twist through the same landscapes.

Ted had been busy. He'd decided to build a house--not to live in--but because he wanted to build something organically beautiful (I think I have that right) and imbue it with his take on how the universe should be. He used the wood from the property itself, materials he salvaged from other sites, native rock, and shaped it to make sure that the whole place looked like it belonged right where he built it. You can tell from the pictures that nature has accepted it as one her own. 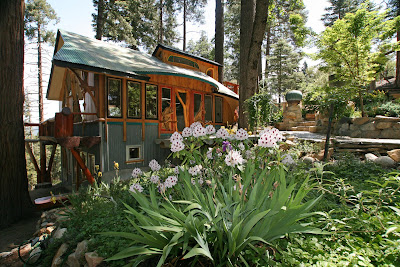 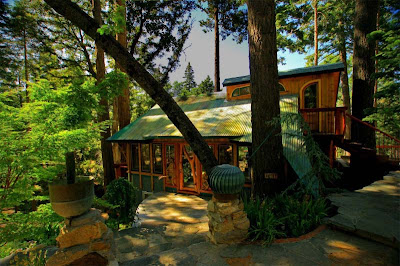 If you'd like to see the inside, there are more pictures HERE. If you're interested, it's actually for sale! I've never wanted to live in California, but this place is enough to make one rethink their policy of avoiding the areas of the country besieged by earthquakes, fires, and mudslides. It is that beautifully thought out.
at July 20, 2009

First pic: looks like a caboose. Second: an older boat. The link pics are dizzying. It doesn't look like a square box inside at all! The staircase is my fave part.

It looks gorgeous. One of our favourite shows here (it is from the UK) is "Grand Designs" looking at fantastic houses under constructions - that one could fit right in...

Wow - he's done a great job - love the loft and the vaulted ceiling in the living room. Nice.

Mrs C--It does look a little like a caboose, doesn't it?

Jeanie--I agree. It's as good as any of the houses you see on those shows dedicated to unusual homes.