I went looking for autumn with my camera this afternoon and this was what I found . . . 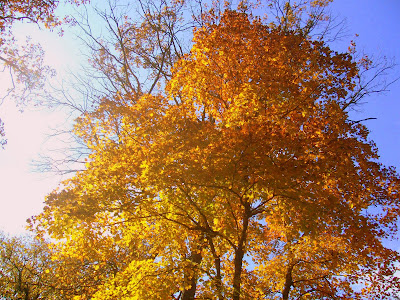 First off, there will be no pictures of my first attempt at fall gardening. Largely because it is the first time I've attempted one and it is a rather pell-mell experiment. Summer gardens--yes, many of them. Spring gardens, of course. Fall garden? Until now I was too over committed to keep up with one. So rather than spend more money on what might be a failed experiment, I gathered up the last of my spring seeds and early summer seeds and planted them here and there as one summer crop after another stopped producing. This amounted to some broccoli, lettuce, spinach, peas, and some green beans. The bell peppers and the cayenne peppers continue to produce more than I can use and I have strands of cayenne strung up all over my office. Interestingly something ate all the spinach seedlings just after they came up but ignored the broccoli and lettuce on either side of it. Perhaps an anemic rabbit? I'm not sure I'm going to get any broccoli heads, but I like how the plants look and there is always next year (one of the many things I like about gardening).

Having pulled up the plants that are no longer producing, I've let large sections of the garden unattended. Most of it is covered with a fine sprinkling of pale green clover. I've decided to leave it alone until it's time to till it all under. I tell myself that this is a good organic gardening philosophy, but, the truth is, I think it's pretty and says a lot about the necessity and beauty of rest. The remaining marigolds and the New Zealand Spinach are running wild as well, having spread well beyond the borders of their given beds. While perhaps less fruitful, it is hardly a lifeless place. A few small volunteer sunflowers continue to sprout, thanks to Gary's approach to filling the bird feeders (which included tossing handfuls of seed across the garden). Having harvested the mammoth sized heads that were planted intentionally, I've left these for the very happy finches.

Day before yesterday, Sam and I carried arm loads of linens out to cover the fall plants with in preparation for the first frost of the year. As we worked, we chatted about next year's growing season. He's already asked for another raised bed to grow carrots in (the only way you can grow them here) in addition to the raised bed he already grows his tea garden in. Gary has agreed that dwarf fruit trees--another one of Sam's requests--are a good investment. Sam is a happy young gardener and has mentioned a possible future career change, from eye doctor to that of a future extension agent. Curing tomato blight is beginning to sound more important than putting glasses on people's faces.

Joe (fourteen year old) has asked if he can grow pumpkins next year. I've fallen for this one before (Jeremiah: Green beans. Daniel: Corn. Their father: Strawberries). Poor Joe, having two older teenage brothers means that you've got fairly seasoned parents by the time you start having your own adolescent crises. More than once he's heard lately, "Better than you have already been there, so don't even bother." I informed him that I'd be delighted to have his company next summer but that this did not mean that I've acquired another crop. If he wants to grow them then he will care for them and see the project through to the end. Meanwhile, I have to figure out how I'm going to fit them into the available garden space. If I plant them among the sunflowers that I'm planning to use as trellises for the green beans, perhaps?

I finished my rock wall last week. It is not pretty at all (mortar is harder to work with than I expected), but I think rose bushes and a bird bath will go a long way toward offsetting its ugliness. And no, I won't post pictures of the wall either, as I am against junking up the internet. Just be assured that it's about a foot and a half tall, made up of a weird combination of rocks of various sizes and goops of mortar and more or less makes a five foot wide circle. I'm going to build a walk way around it using sand and the remaining rock once the rain slows up for a few days. That should at least make it look like the artist tried really hard and perhaps passing motorists and meter readers will feel sorry for me instead of pondering its eye-soreness.

Gary built me a 5 x 5 x 4 compost box and it's already full of leaves, kitchen left overs (like orange peels, coffee grounds, etc), and garden remnants. I'm only half done with raking the front yard and I'm beginning to suspect the box is not big enough, but I haven't had the heart to tell him. I suppose I'll just start another pile next to it.

My greenhouse plans have been delayed by two months of short pay checks (more on factories, bonus checks, and dirty pool in another entry), but we do have the frame for it in place (keeping in mind that in a former life it was a 10 x 10 dog kennel donated by a friend who simply wanted it out of her yard--so putting it together was easy). Work appears to be back up to speed, so perhaps I will still be able to start tomatoes, broccoli, and cauliflower in January, though it does throw it a little late.

Our really big news is that we've decided to invest in bee hives. Dennis Bryant (Hi Dennis) is to blame for this. Dennis, who kept posting enticingly beautiful pictures of his bees and hives on his facebook page, makes bee keeping seem like a Zen experience (probably not Dennis's choice of words) and you know how I can be about zen and nature and God (who probably wouldn't use those words either). Actually, it simply fits with our still evolving philosophy of self sufficiency. We aren't anywhere near
being able to pull the plug on civilization, but we would like to move further away from depending on strangers for our food. And honey is an excellent source so many things that it seems foolish to not try it. More on that as it comes.
at October 19, 2009

Oh Mary ~ you will become so attached to the bees ~ i affectionately call mine 'the girls'! we stared seven years ago with 2, grew to 13, lost 11 the past two years from CCD, but this year (by our own dividing and letting them raise their own queens) are back to four strong hives.
Eileen

It's so rare that I'm cited as a positive influence :-D I predict that your bees will be like another member of the family.

Eileen! Hi! Gary will not be happy to hear that I'm likely to become attached. He thinks we have enough pets. I pointed out that these at least don't need litter boxes or leashes. :)

Dennis--I just want you to know that you're responsible for the influx of emails you can expect from me peppering you with questions.

Mary ~ my eyes pooled with grief and frustration a few years ago from the CCD; and i've had laughter (and then 'yuk!")when splattered by warm winter day 'cleansing flights'!!
Eileen

Oh Eileen. I can imagine your sadness. We're looking forward to all the ups and downs.