The Dog Gets to Go Too 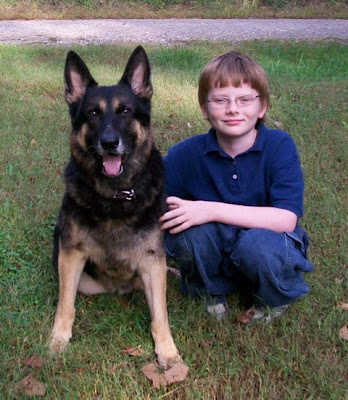 I don't know if I've mentioned it or not, but about a month ago we acquired a new-to-us minivan. It's great to have something the entire family will fit in again as we've been traveling in shifts or drawing straws over who got to go and who got to stay home for the last year and a half of driving smaller cars. Frankly, most of the time, I didn't mind it so much, especially when it meant that I could stay home while Gary took the boys to see my mother-in-law. Also, having only one car was the perfect excuse to say no to invitations and was a big step toward breaking away from a life long habit of over obligating myself. Too, it was much easier to keep up with the expenses of one vehicle. But Gary wanted me to have something decent to drive (read: without all the paint falling off it), and I wanted to be able to pick kids up for youth group, and be able to go camping without trying to figure out how we were going to hold all the humans plus all the camping equipment. The the van is nice, well cared for by its previous owner, lots of room for all of the above, plus any canine passengers that would like to tag along when the weather is cool.

When Gary brought it home and parked it in the driveway for the first time, Solomon, my German Shepherd, dashed out the front door and made a bee line for it. He circled it, sniffing it over, tail wagging. When Gary opened the driver's side door, Solomon climbed past him and continued investigating the inside. He snuffled around a bit, climbed onto the bench seat in the rear, lay down for a second, looking around, tail still wagging.

After just a second he clambered out without being told to and followed Gary into the house. We were amused and surprised at his intense investigation. Little did we know that he was measuring it to make sure it would hold German Shepherds comfortably.

At eleven years old, Solomon is distinctly elderly, has a salt and pepper muzzle, faint cataracts, a degenerative disease that causes him to wobble and weave a little when he walks, and has recently become prone to ear infections. But there's nothing wrong with his hearing, his memory, or his grasp of human language. The dog knows the words "Go to town/ for a walk/ for a hike/to the park . . ." in English, German, Pig Latin, and Spanish. We suspect he has a thesaurus under his bed as he also understands any variations we come up with as well (ambulate,amble, exercise, stroll, and locomote . . . he's onto them all). And give up on hand signals. He reads sign language, and, we strongly suspect, minds too.

I gave up fooling him a long time ago and settled for the direct approach, "No, you can't go." He heard this a lot while we were driving the Oldsmobile and the Lumina. There just wasn't room in there for a big dog and anyone or anything else. In fact he heard no so much, after a while, he gave up asking.

The morning after we brought the van home, Gary and I were drinking coffee and discussing our plans for the day and he mentioned taking it to the grocery store. Out of the corner of my eye I noticed Sol's ears shooting up every time Gary used the word van and I commented on it.
"You're imagining things," Gary said.
When Gary picked up the keys, Solomon was already at the door, his eyes bright with hope.

Gary ordered him to move in a more serious tone and the dog (my erstwhile snappy obedience/tracking dog) slumped and slooowwwwly lumbered out of the way.

Thus began a campaign to convince us to take him along. Picking up car keys meant looking into Solomon's amber eyes and explaining why he couldn't go this time. He generally recognizes Gary's white work uniform, either of us in church clothes, kids in best outfits, and simply does not ask. But he was ignoring all the usual cues. We went from the usual "No, you can't go" to "Look, I'm sorry, I've got to go to work" or "We're going to church and, I know it's ironic considering you'd be the only one there without sin, but they don't let dogs in" or "Sorry fella, we'll have a guest and they won't want dog hair all over them." With every refusal the wind would go out of the dog, he would fold into himself, ears, tucked, tail dragging as he slunk across the floor to his bed.

We sucked. We were mean. Surely the dog was to be pitied.

"You know, I think he remembers the last mini van," I told Gary.

"But we haven't had it for three years," he said.

"I think it helps that he spent a lot of time in the last one." In those days, I often took Solomon with me to the grocery store because he could be trusted to stay out of the groceries. Occasionally, if it was going to be a short day or if I had an evening meeting, I would take him with me to work. I so often faced dark parking lots and long lonely drives home, just knowing he was there was deeply reassuring. He was one part security guard, and one part security blanket, and we traveled a lot of miles together.

Gary shook his head. "But how did he generalize it from that van to this one?"

"I don't know, but he seems convinced that a van means that the dog gets to go too."

Finally Gary had to make a run out to the bank on a day in which the dog could go.

I have never seen such a canine celebration as I did that day. Solomon yodeled and danced in circles, dashing back and forth between the van and Gary, trying to hurry him up. Gary opened the sliding door and Solomon climbed in, settling himself on the bench seat as though he'd done it a thousand times.

For some reason, though, he didn't stay there. Apparently he decided to test out the captain's seats in the middle (no small feat for an 80 lb dog), because Gary reported that he nearly jumped out of his skin when he looked in the rear view mirror and saw a huge black and tan face staring back at him. We suspect he was testing out the view and looked to be smiling from ear to ear.

He's since resumed his co-pilot position of traveling with me on errands around town and even to the school today for a parent-teacher conference (Daniel is on the honor roll). It's good to have him along again and it's obvious he believes he's right where he belongs.
at November 10, 2009

We had an old Lemans that the dog was allowed to ride in. He loved that car, and he went for a ride nearly every day. The old car is not an Oldsmobile. The windows don't go down all the way, and his feet slip down into the crack (the seats are leather). Buck misses that old piece of crap Lemans. So do I.

German Shepherds are very bright dogs, and I'm not surprised. I hope he gets many rides in the new van. :]

i LOVE this! i can just see his face... just like my Sherman when i am going out the front gate with a horse... he loves to ride with me, but when it's going to be hot i don't bring him. he always looks so sad...

if he sees me loading ANYTHING into the horse trailer, he thinks we are going camping... and if i tell him we ARE going camping, he sticks to me like glue to make sure he's not left behind!