Unto everything there is a season . . .

I am on track for NanoWrimo with a word count of over 16,000. Unfortunately, TUF (writer's forum I moderate on) is down so I'm working without the hoped for cheering section. The admin who so generously set the site up for us is a computer whiz so I'm sure he'll get it back up and running as soon as he can. Meanwhile, I'm writing the old fashioned way, the way I started out in this game. Alone. As God intended.

So on that unrelated note, I give you Marigolds and a quick tour of my garden at rest. 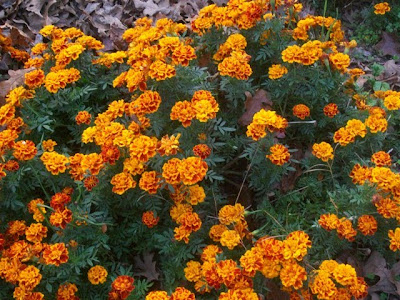 A rose by any other name would be as sweet as a senior senator from Maine . But as for me, give me the marigold, who asks nothing except a little spot in the garden and a little care. Everett Dirksen (who thought that the Marigold should be the Illinois state flower. He was so enamored of it, that his hometown now holds a Marigold Festival every year in his honor.)

I'm with Dirksen on the Marigold. I like roses and will probably try my hand at growing them this spring, but for sheer determination, you gotta like a plant that invites itself to the party and then sets about deterring the annoyances that ruin the fun (mosquitoes, nemotodes, and a host of other insects, including Japanese Beatles). When I say "invites itself" I mean that I planted exactly two bushes this summer. The rest are the progeny of last year's two marigolds. When I spotted them, I let them be and it wasn't long before they were providing protection to the nearest crops. This evening Sam even discovered a small volunteer blooming by the doors to our old storage shed, brightening up an otherwise dismal spot all by itself. Would that more humans lived that way. They are beautiful, yet resilient. Independent and hardy, long after everything around them has gone to seed, they bloom on. They're even edible and apparently offer some medicinal benefits.

I recently learned that leaves can be used as mulch as well as composting material (Previously, I'd heard they were too acidic) so I've been raking and hauling and dumping them on the garden as well as adding them to the compost heap. Because of all the raking, It looks a little like autumn happened in just my garden. and I kind of like the dramatic contrast between now: 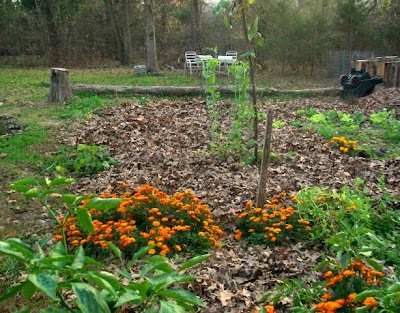 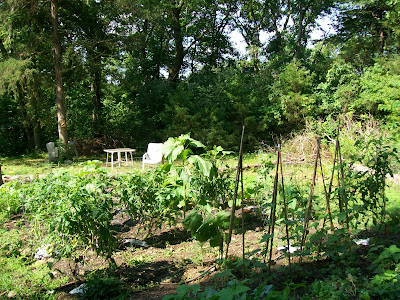 Though Solomon thinks all the mucking about with gardening equipment is a waste of time, but he has learned that trips to the garden often include games of fetch, so he's never far away. Remarkably, he is very careful about the plants, walking carefully between the rows when he does pass through (unlike some other dog whose initials are Oscar). 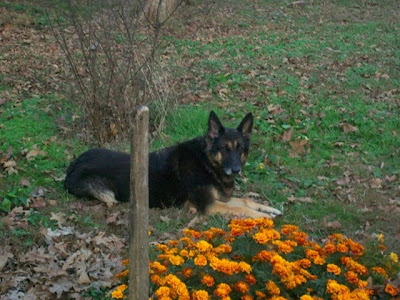 I love Ecclesiastes. It's such a wise little book.

PS I'll be your cheer leader!

Here's hoping the gecko will fit in...

Scotty--I am sure it will look great and I've already got a spot picked out for it. Thank you so much. :)