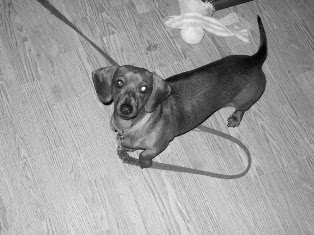 When Ruby was a puppy I used to tell Daniel that she was better than any of those dolls that they send home with teenage girls to give them a sense of just how hard it is to care for something that never stops needing you. Ruby got him up multiple times a night for the first three months of life, needed constant supervision because she put everything in her mouth, challenged his authority, and generally consumed several hours of his day. She brought him joy and headaches, often back to back, scared him when she got sick or hurt, and made him question what the thought he knew about dogs. 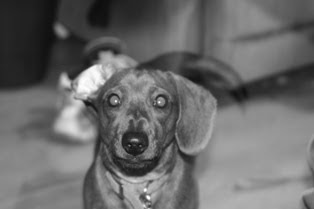 Recently we discovered that she is also an excellent surrogate grand child. This isn't nearly as complicated as being parents. The only question is, how much are we going to spoil one, not whether we should or not.

A couple of weeks ago, Daniel was at his girlfriend's house and Gary and I were sitting at home watching TV when Ruby launched herself at us, bouncing back and forth, washing faces, and dolling out affection of her own. She wound up on her back between us, her bare pink belly exposed for tummy rubs. Quite unconsciously, we began talking baby talk to her. Words like Snookums, Oodle-doodles, Ruby-dooby, and other nauseatingly sweet rhymes fell from our lips. Words I didn't think I knew.
"Mom? Dad? Are you two okay?" Joseph stood in the doorway, holding a book, staring at us both.

"It's just that I don't think I've ever heard you two do that do that before." 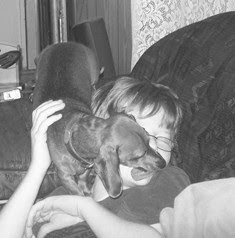 My son shook his head and exited the room backwards, hands in the air.

Daniel (the seventeen year old) caught his father feeding Ruby off his plate the other night. "DAD! What are you doing? Are you trying to get her in trouble?"

Gary looked helplessly from his plate to the waiting dog. "I don't know what came over me."

"It's Dementia," Joseph whispered. "They told me the other day that they're practicing getting old."

"We did not. We said we were practicing being grand parents," I argued.

Daniel gently picked up Ruby and placed her in her kennel and shook his finger at the two of us. "Please don't spoil her. You have no idea how hard it's been to teach her to behave herself at meals."

We tried to look sorry and failed. You have no idea how hard . . . We laughed. A lot.

You know, this grand parent gig might just be fun. 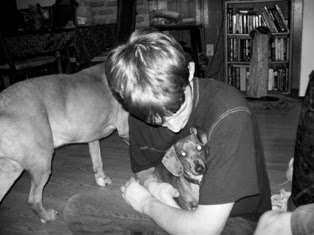 Glad you liked it. Ruby regularly makes us laugh.

I love that first picture of her, one ear back, one ear forward, and that Mona Lisa smile on her little dog face.