I swear, somewhere under this pile of tinsel . . .

and wrapping paper there was a house once. At least that's the last place I saw it.

Some years I'm not anxious to take down the tree and the Christmas decorations. This year is different. There's a certain urgency, a need to get back to the (largely happy) business of living. Even the boys, who love the change our home undergoes around the holidays, have asked when we're going to put it all away. I suspect this may speak to an adjustment we've all made in the last couple of years, an ability to celebrate even smaller events as they surface so there's less of a need to turn Christmas into a production.

For me, it seems as though a craft shop has exploded in my office. Boxes and baskets full of candle and soap making supplies are everywhere. And in my bedroom I'm still harboring gifts for relatives we haven't seen yet. Making it all was lots of fun, but I'm ready to settle back into routine.

This New Years eve Gary is working and I'm playing chauffeur to Daniel and his girlfriend, Kristy, transporting them to a church New Year's Eve party, which I don't mind a bit. They've undergone a bit of firing of late, the kind of testing that all relationships go through. In this case it was a young woman who decided that she wanted Daniel for her own and set about trying to acquire Daniel's affections and driving Kristy away with lies. I've known her for many years as has Jeremiah (she is a really cute girl) and she's what's best known as a trophy hunter. She's not really interested in Daniel himself, she simply wants to be the one all the boys adore. What this young woman does not understand is Daniel's capacity for single minded devotion (see, there's an upside to Asperger's). He wouldn't dream of lying to Kristy and at present he can't imagine himself with anyone other than her. (Yes, that worries me too, but we'll cross that proverbial bridge when we come to it). I feel a little sorry for her once school starts again. She's lost a friend in Daniel unless she can come up with a pretty good apology.

Meanwhile, it gave me an opportunity to talk to Daniel about how to make sure this doesn't happen again (and also arm him for future relationships). My own insecurities serve me well here--I used to be the fearful girlfriend. Communicate, I told him. Call her and tell her regularly how much you care about her. Ask her to come over here. Take her out on dates. Talk to her about what's going inside your head. She'll be a lot less likely to believe other people's lies or the worried voice in her own head if you'll demonstrate your affection occasionally Bless him, he's not good about any of the above. He adores her, he just forgets that she can't see what he's thinking. But I saw the wheels turning in his head in response to my coaching so I hope it made an impact. 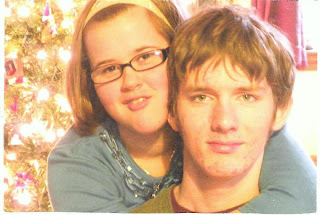 Meanwhile it's freezing and wet outside--not quite snow, lots of drizzle, lots of mud. It is only December and I am quite ready for Spring. It's going to be a long winter . . .
at December 31, 2009

I'm ready for spring, too. I appreciate the girlfriend struggles your son is going through... wow.