Snow. Lots of it.  If you want poetry singing the praises of the stuff, you're going to have to look somewhere else (may I suggest Robert Service?). I've run out of flattering things to say about it, left only with a list of impolite adjectives (and a strong adverb or two). Winter is a clueless guest that hasn't heard of the three day rule.
But Solomon and I did take a long walk in it this morning. He seemed to know that it made him look like he had been gifted with a fine layer of diamond dust and  that it became him. He aged backwards, shedding at least ten of his eleven years as he bounded through the drifts. And I followed some deer tracks across a clearing and into the woods and took a rest in the white noise of the snow hiding the hills in a pillowed grasp; presenting a pause in the action to those wise enough to take it.  If not wise, then I am at least not foolish enough to ignore the offer.
Admittedly, it does improve my new neighbor's unfriendly landscaping job (read: slash and burn). I miss the shadowy over hang of those woods terribly and, between you and me, I fervently wish he would go back to Kansas and stay there (now we know why they don't have any trees). 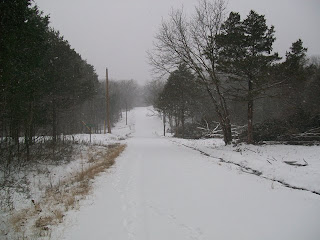 And then there was this type A Song Sparrow in my front yard. A cheeky little guy who  decided that one entire feeder and the seed beneath it belonged to him. He chased away all competition with admiral fervor for most of the morning. In fact he spent more time defending his territory than he did enjoying the food. Ahh. There's a life lesson for you. 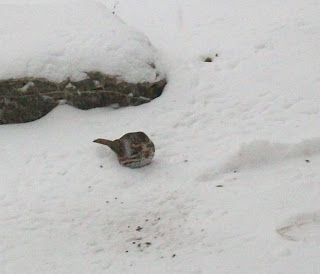 My other feeders (I have five of them), were busy all day teeming  with Juncos, Chickades, Wrens, Titmice, Cardinals, and Wax Wings. Below is my favorite, which does not typically lean. I surprised a gang of squirrels (they run that way in the Ozarks). Most of them fled at the sight of me (We are prepared for gang warfare in this neighborhood and are often armed when when we open the front door in the morning). But one fifty-pound miscreant attempted to hide behind the feeder he was dangling from (perhaps not the brightest member of the the chattering mafia). He might have gotten away with it except that he was fifty pounds and wider than the item he was hiding behind and his tail was wagging madly back and forth.  I think I will call him Bruno should he be hapless enough to return. 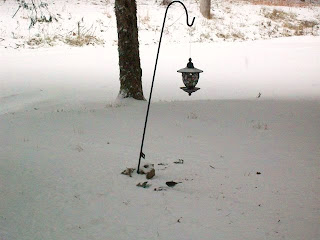 And that's all I have to say about that. As you can tell, I'm sure, I am miserable here. Just miserable.  And so very ready for spring.
Mostly.
at January 29, 2010

I guess that since most of my memories of snow are childhood ones (and therefore biased towards fun), I forget how miserable a long cold Winter can be. Here's hoping Spring arrives for ya soon.