Birds of the Air

Gary had an opportunity to pick up some over time this week and took it because beginning next week our hours will be cut to about thirty. We'll still be okay, but things will be tight. We've been told to prepare for this to be a long-term thing (at least three months).

I've tried to greet him at the door every morning this week with a cup of coffee and a breakfast made, something I don't necessarily do every day, as he's often not hungry when he comes in and when he is, it's for "non-breakfast food" like the leftovers from the night before. I've tried to be especially sensitive to his needs and have pandered to him more than usual (yes, that means exactly what you think it does). It still doesn't seem like enough.

We've got one more night in this week and then he'll be home for four days. I have a short list of honey-dos for him, but they shouldn't take too much time. So, as the weather is finally beginning to behave in a spring-like way (as in warm and sunny as opposed to the other spring-like way which is wet and cold), we'll try to get a couple of short hikes in and perhaps take in a movie at the dollar theater. However, on that short list, there is one very necessary but unpleasant task which involves talking to our oldest son.

As Gary ate breakfast this morning, the boy was the primary topic of conversation. The computer store laid him off two months after hiring him. The second store they'd opened wasn't as successful as they thought it would be so they had to pare down their staff. They've offered to give him excellent references and said they will call if it picks back up. The manager still touches base with him regularly and comments that he misses him, which is nice. But the kid has been without a job for close to a month and living off his savings, which are disappearing fast and he's in no hurry to go out and find another.

Gary has a saying (that may or may not be his) that goes, "God feeds the birds of the air, but he doesn't drop the worms into their nests." I think this not-so-little bird may be sitting around waiting for just that to happen.
The kid isn't exactly lazy--when he has a job, he is extremely conscientious, always on time, always on task, doing more than he's asked to do, with a good attitude. Things are extremely slow at the local grocery store where he was working before, but the managers and cashiers and those who run the deli asking about him and often comment that they laid off the wrong people this winter, one of those being him. He understands how to work, he just doesn't seem to understand how to go find it.

Yesterday I did Jeremiah's taxes for him and filed his financial aid, largely because his taxes are less straightforward than ours are and it had him stymied.  After watching him do nothing about it for a week, I realized he was in danger of not getting any financial aid at all if I didn't help him. He's due to move into the dorms next fall and I don't want him to shoot himself in the foot.

I awakened him around noon (he's staying up all night playing video games and practicing guitar) and told him to go out and apply for jobs. Silly me, I took his lack of argument to mean that he had agreed. Collecting his W2s and other tax information, I trotted off to my desk to take care of business. When I emerged two hours later (Did I mention that his tax stuff was confusing?) he was giving Joseph a bass guitar lesson, which was great, but this was not helping him find a job (and, no he doesn't want to give lessons).

I pointed this out and he told me, looking mildly surprised, that he fully intended to go by the grocery store on his way to band practice.

"They're not hiring," I said. "They're not going to be for a while. You're going to have to apply somewhere else." I mentioned other places he could look.

He didn't want to work there, he'd heard bad things about the other place, and didn't like the sounds of the kind of work he'd have to do at that one.

I managed to retreat quickly, narrowly avoiding saying a lot of things I'd regret later.  I sat at my desk and cried some, asking myself all the questions a parent asks when they see their teen/young adult children making bad decisions. His father entered, we talked (okay, I did most of the talking, he just sorta sat there trying to understand why it was making me cry). In the end, he agreed that the kid needs a job, that we can't afford to pay his living expenses too, and that he probably should be the one to talk to him (as I can't seem to keep my cool).

I know what this translates to. It means a man-to-man conversation as they go do "manly stuff". This is Gary's solution to any kind of problem we're having with the older boys and it's great if the issue is over morals or character-development, but not so much the big serious "get off your butt" stuff. It tends to leave the kid with the impression that whatever he's doing isn't all that serious, when in fact it is. Worse, it makes anything I say seem unreasonable and shrewish. After all, if his Dad isn't upset over it, then it must not be that big a deal right?

This morning, as a footnote to our conversation yesterday, I told  Gary that some of Jeremiah's (employed) friends on Facebook had suggested some places that are hiring. He'd shot down every single one of them with an excuse, much as he had me. One of the suggested jobs had a very familiar name. Gary worked there during our first year of marriage, when I was pregnant with Jeremiah and couldn't work (doctor's orders). Gary was also finishing his last year at college and holding down another job as well. We both followed the same train of thought to the jobs he's held throughout our twenty-plus years together--some of them dangerous, often under extreme conditions, and really long hours. I'm here to tell you, the man has some battle scars.

I saw the look on Gary's face and I have a feeling that the tone of their conversation has just changed. Jeremiah is a good kid doing a lot of the things he should be doing (is on the Dean's List, works as a youth leader at a local church, plays music with a Christan band), but seems he's under the impression that this is all enough to keep him from doing the things he doesn't want to do. It's clear he needs a fairly hefty shove to get him out of the nest and in search of his own worms and I think papa-bird is about to do so.

Pileated Woodpecker--construction worker, works hard for his food, mates for life. This young male has been visiting our feeders for a couple of weeks. He appears to be on his own. 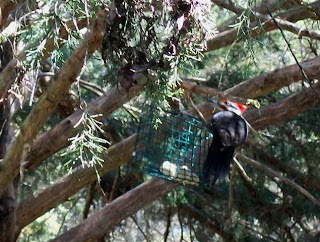 Oh. I'm sorry. About Gary's job. About Jeremiah. Sometimes, though, those baby birds do need to be pushed out. That's how they figure out that they can fly. Deep cleansing breaths.

Aaah, kids - sometimes, despite our best efforts to guide them, they still wanna wait for the world to hand them stuff, don't they?

Thanks guys. He got a shove from Dad today. We'll see how this plays out.

Scotty--I was relieved when a mother who I greatly admire said that she sometimes looks at her grown daughters and wonders where on earth she went wrong and what it was she forgot to say. "It's their own stuff, Mary. God had to show me that it's not always all about me and what I did or didn't do."