Today was an ordinary, routine Spring day. I have absolutely nothing exceptional to report.

I arrived home from church on Sunday to find that Solomon had a seizure in our absence. The other dogs were frightened, especially his closest buddy, Ruby (the dachshund). She was hiding under a bed, barking non-stop, and refuse to come out. Solomon himself was disoriented, panting, and tried desperately to climb (all eighty pounds of him) into my lap. I cradled him when he'd stand still long enough, and tried to comfort him while feeling useless once again.

He's battled ear infections all winter, but there's been no seizures since last December.  The vet sent us home with the same medication all three times we've been back. When we returned to see him two weeks ago, he prescribed the very same steroids that caused the seizures last time. When I pointed this out to him, he told me it was a lower dose and should not create a problem. On top of this, he prescribed a water based antiseptic (a powder actually, that you mix with tap water) after telling me that the over the counter glycerin based stuff I was using was causing the ear infections, leaving me feeling enormously guilty.  After  a week of using his water based stuff, the poor dog's ear drum ruptured. He had three grand mal seizures in twenty-four hours, including the one he had in our absence. They left him weak and ill, something this already elderly dog didn't need.

Needless to say, we went to a different vet. I say that like it didn't take half the day just to track a good one that was both within reasonable driving distance and not charging unreasonable fees. We finally found  a very nice, very gentle man who handled Solomon with extreme care. He prescribed oral antibiotics and, when his ears are completely healed, recommended I use an ear wash regularly to maintain the health of his ears. The significance of this? It's the same ear wash the other vet said was causing the problem. The glycerin is safer, this one said. I did not bother to tell him what the other vet told me, though I brought out all the previous medication the other vet had prescribed and handed it to him in a baggie so he'd know what we've already used. He frowned at the water based stuff and asked me what it was. I told him. Water? He said to mix this with water? He repeated my words and was silent for a moment. (For the uninitiated--water based anything in an infected ear is asking for ruptured ear drum--I learned this too late). To his credit, the new guy quickly went on to tell me that the antibiotics the other vet had prescribed were fine, but not what he himself used. Ear infections are notoriously difficult to get rid of so you'll need to brace yourself for the long haul on this, he added. Some dogs never quite get rid of them. Something else the other vet never bothered to mention. He asked me a lot of questions about the seizures. I told him I was fairly certain they were caused by the steroids, which trigger blood sugar drops and those cause seizures. He wasn't sure he agreed and proposed that the ear infections themselves might be triggering them. He asked me to please feel free to bring Sol back if we have another. I assured him that this would be no problem.

Solomon is still in a lot of pain, but far better than he was. No seizures since yesterday morning and happily followed me about the yard while I worked outside today. I've temporarily upped his rations and am feeding him four times a day until his blood sugar stabilizes (probably tomorrow), which just delights him. I expect him to continue to improve.

Ruby has still not forgiven him for frightening her. She reminds me a little a four year old girl, staring at him with big eyes every time he passes, growling and leaving the room if he approaches too closely.

As for my ordinary boring day? I got up early this morning and sat in my quiet house, watching the dozens of colorful little birds that have lately found my six or so feeders. Yellow and blue finches,  a confident little male cardinal, an oriole or two, nuthatches, a couple of thrushes, field sparrows, a single pileated woodpecker,  and a lone mourning dove (who waddles around under the feeders pecking at the ground). They were joined by a couple of very tentative grey squirrels who are welcome as long as they stay off the feeders and only eat what's falls. Tara, Sam's young tortoise-shell, perched on the window sill beside me and studied them, her tail twitching back and forth   Gary and Ruby (who has finally learned not to bark at them) joined me for coffee about eight o'clock and together we studied the birds until the boys began to stir.

A day of small but satisfying decisions were ahead. We made a run to town and stopped off at the eye doctor's office so Gary could pick out new glasses. My heart nearly failed when the woman who was assisting us said, "Watch this!" and bent one of the frames on display in half. When they popped back into shape I was instantly sold. Gary decided that bifocals are stupid (I agree, but will wait until next year) and has gone back to single lens glasses. Then we then to the hardware store and bought (brace yourself--it's really big news) a NEW MAILBOX.

Let me explain why I am excited enough to report this. We've lived with the original black mailbox that was here when we bought this place nearly ten years ago. It was rickety and a little rusty then (maybe as old as the house even?), sitting on a rickety post at the edge of the dirt road. I backed over it once several years ago (Hush. Just hush . . . ) which only served to make it look worse. However, Gary hammered on it until it was vaguely mailbox shaped again, replanted the post, and we soldiered on with it--sans door.  Then the older boys discovered BB-guns a few months ago and it became a great place to perch objects during target practice. A few more holes (which they all swear they were not guilty of as they hit their targets every time . . .) did not improve its appearance. I suspect it is a hallmark of middle age when the highlight of someone's day is putting up a new, steel gray, mailbox with large letters on the side. And, no, there will be no more target practice that includes my new mailbox.

I worked in the garden this afternoon, shoveling, running my hands through the tilled earth, and tossing rocks. Lettuce, spinach, onions, and cauliflower are all up (Peas and potatoes are stalling). I am preparing for the next phase--summer crops--digging hills and trenches for tomatoes, green beans, squash, cucumbers, watermelon, sunflowers, and pumpkins. The new fruit trees are showing tiny red buds, the beginnings of new growth, and the roses are beginning to branch out as well. The greenhouse is fast filling with gardening accouterments, shelves, and seedlings. I am looking forward to another summer of learning and growing.

While I was outside I installed a new rain gauge for Weatherman Sam, who signed us up to be a weather station. Sam is fascinated by weather patterns and daily reads us the weather forecast.

This evening we will watch Lost and eat dinner and later Gary and I will pop popcorn and watch whatever Netflix has sent along in the last forty-eight hours.  Solomon will lay in his bed and rest. Ruby will curl herself into a ball in Gary's lap and object noisily when I insist on crowding in for a cuddle.

Tomorrow I fully intend to live another boring, ordinary day. And, if I'm lucky, this will extend into the next as well. 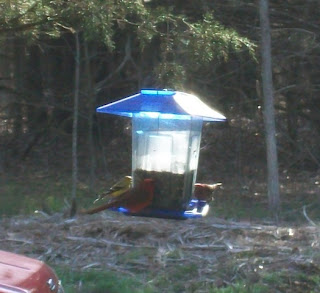 The boys call this one Bruno 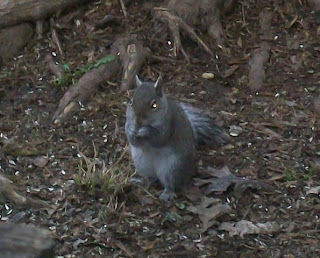 Pileated Woodpecker--also taken through screen--at least he was still this time! 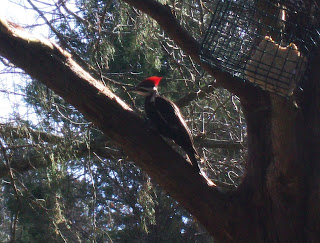 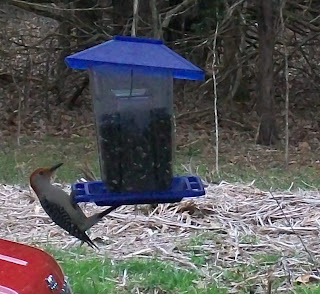 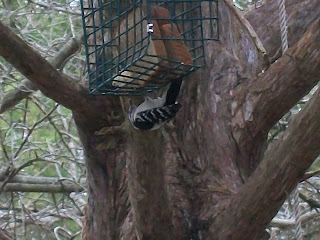 Do you think he knows that he's the same color as Jeremiah's jeep? 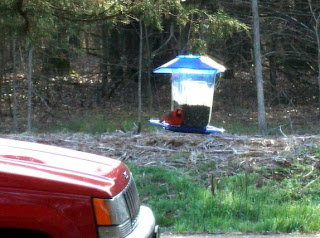 Had to chuckle a bit about the mailbox since it brought back memories of my childhood where I first owned a BB gun and then a .22 rifle. I peppered our mailbox too while shooting at coke cans perched on the top.

As for dull, ordinary days? Bring 'em on, I say. For years my kids couldn't understand why I loved a dull, ordinary day as a break from my job especially with the number and type of decisions I have to make at times.

Here's wishing you and yours a safe and happy Easter.

Me too, Scotty, thank you. Gary tells me there is something magnetic about mailboxes and BBs. I explained that the laws of physics had better change.

I can see exactly why you in particular would look forward to "boring" days.

Thanks, I hope you and yours have a nice Easter too.