Sam ran through all of his English curriculum earlier than I was prepared to order new material. It's becoming clear that fifth grade work is far too easy for him. Actually it's been clear for a while, but I didn't want to leave any learning gaps so I'm allowing him to finish out the year. He's already progressed to six grade science, sixth grade history, and is rapidly getting comfortable with pre-algebra (thank goodness).

Today he took it upon himself to blog in place of his English curriculum (As in, he was already at work when I announced it was time to begin). He's clearly thinking about some deep things these days. I didn't even know Sam knew what the butterfly effect  was. This is what you get for allowing Dr Who into your home.
Meanwhile, Daniel came in the door today bearing a piece of his artwork. This is the first time he's allowed me to show anyone what he can do. We've always known the kid was gifted artistically, but we didn't know until just this year HOW gifted. He found an art teacher who challenged him to raise his standards for himself and began producing startling good work almost immediately. 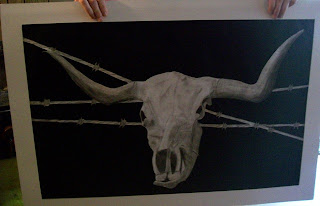 I don't know what this means to his future, but I do know that his eye for detail will very likely take him anywhere he wants to go.
at April 27, 2010

Amazing ~ really remarkable! Thank you Daniel for letting your mom share this with us. Eileen

Thanks Mrs C. I'll tell Sam what you said.

Eileen--He is a little embarrassed, but pleased with all the attention. I'll tell him though. :)