The ties that bind (also known as: Please untie your brother)


We have two birthdays in April, Joe's and Jeremiah's.

Joe turned fifteen on the tenth. He's looking forward to high school, talking about college, about his future. He's joking about curing cancer, though I suspect there's a note of seriousness to these statements. Joe's  heading toward six feet tall, lanky and slender with red hair, freckles and a great smile; he fairly vibrates with a  mix of clownishness and sensitivity. He makes friends easily, especially with girls.  Most people like him immediately, though I'm not sure most of them know why. 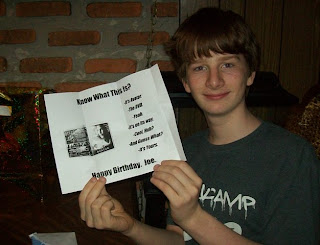 Joseph is happy--Avatar was pre-ordered just for him!
Jeremiah turned twenty this week. It is a strange feeling to have a young adult living under my roof. He still treads a fine line between maturity and adolescence, crossing back and forth with the aplomb of a double agent (or mad bomber), completely comfortable with treading through minefields meant to keep the two apart. On the Dean's List in college, he's already a more disciplined student than Gary and I were. I have great hopes for his future. 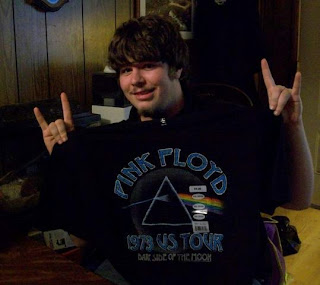 Pink Floyd is apparently timeless
As the oldest, and the first one to strike out into the world, the first to attend public high school, the first to drive, the first to graduate, the first to go to get a job, go to college, Jeremiah is the scout who enters the promised land, reporting back on all that he has seen; the giants to be overcome, the riches, the milk and honey. And these days the one he does the most reporting to is Joe, who will start high school next year.

When Jeremiah found popularity because he played guitar, he taught Joe how to play as well. And when Joe grew frustrated with his own inability to play with the same ease as his older brother, Jeremiah handed him a loaned bass guitar and gave him more lessons. He sometimes joins his big brother for jam sessions and is going to church camp this summer that focuses on Christian music. 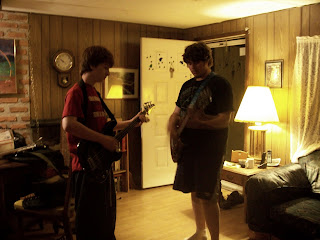 Impromptu coaching
Jeremiah realized that he could have been a better student in high school (he did well, but not so well as to gain access the scholarships he would have benefited from had he applied himself a little more) and  has challenged Joe to aim for the top of the class. "Don't do what I did--Go where the money is," he said.  He even added quietly along the way (out of our hearing and repeated to me by Joe) "I wish I'd listened more to Mom and Dad." Sometimes, without my blessing, he looks over Joseph's shoulder while he does school work and points out his mistakes.

He's even coached him some in social skills, though Joe needs little help there, cautioned him about who stay away from and who to seek out. He often invites him to attend the youth group at the church he helps supervise. And he talks to him frankly about the friends he's seen who did more than just experiment drugs and alcohol and where those people are now (most of them are still floundering--two, sadly, are addicts).

Jeremiah is moving into the dorms next fall. It is time. But I can tell he is worried about us, about what we will do without him. He is the household computer tech, keeping all the systems running, helping with major electronic purchases and repairs. Lately, he's somewhat forcibly been teaching Joseph how to make minor repairs and showing him how to trouble shoot the household network. I have not bothered to remind him that I am more than capable of managing this all myself as I suspect it will be good for Joseph to learn this one way or another.

He is also the force behind Joseph learning to drive, even bringing him a driver's ed book on his birthday, and bugging him to study. Though no one has said it, I know what his motivation for this is. I am a very good driver, but am often a nervous wreck by the time I get home from a road trip. When I worked for the university I spent a lot of time on the road, covering hundreds of miles in a week; you'd think I'd be over any discomfort by now. I'm not.  Because it affects me this way, and this is an alien thing to them, it worries Gary and Jeremiah. I guess nervous equals wreck in their minds. So they often scheme to keep me from having to drive more than I just have to. Jeremiah has decided that Joseph will be the next chauffeur. Though somewhat misplaced, it is a sweet concern and I've decided not to correct the perception as it gives them pleasure to know that they are taking care of someone else.

I have already seen Jeremiah's example playing out between Joe and Sam. Joe has handed his precious bass to Sam a few times and allowed him to pluck around on it. He's dragged his microscope out to show Sam what cells look like. He reads the news to Sam and explains the world as he understands it. Some day I fully expect to overhear him telling Sam to study harder for his driver's test so he can take over for Joe when he leaves home.

I am not especially close to any of my siblings; we can go months at a time without speaking and none of them feel my absence. It is largely the age difference combined with the fact that I was raised during a different era in my parents' lives; I was ten when my mother and father split and my younger brother barely five and up until then it was very much a middle-class existence with middle-class values. Though he is a good man, he reflects the next phase of my mother's life, more free-spirited, less disciplined.  He and the younger three are all very close and seek one another out on a regular basis. It used to bother me some, but I've made my peace with it. I know they love me and I love them and when we gather on holidays, there is a sense of kinship, of being a part of a long time inside joke that outsiders do not understand; you had to be there. But it does not lend itself to ongoing closeness and sometimes this makes me wistful.

But I've wanted better for the boys, have prayed for it, to be honest with you. There is power in numbers, and even more power in numbers linked by blood.  They do okay on the whole. There are the normal arguments, spirited debates over whose turn it is to do chores, who left the dirty towels in the bathroom, who is using whose hair gel, etc. But they also seek one another out to hang out with and they even occasionally cover for one another. In the end, when it really matters, I know beyond a shadow of a doubt, that they will have each other's back.

But I hardly dared to hope for friendship. That happened completely independently of anything I've set out to inspire in them and I am over-joyed to see it in action. 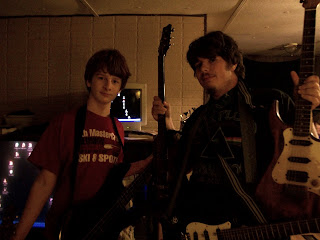 The two amigos who insisted on posing with all of their instruments.
at April 25, 2010

First things first - happy birthday to the J-duo. Congrats to both of you for making it as far as you have; some parents never know that joy, and since I'm on the other side of the pond, I can only posit that it's a combination of parenting skills by Mom and Dad, as well as listening skills by you both. It doesn't always make sense, does it, boys, but it usually stand you in good stead, yes?

The Floyd is indeed timeless and I've had Dark Side Of The Moon on pretty much continuous play in my car for the better part of a month now - Jeremiah? If you ever decide to lay down a You-Tube track of yourself playing a Floyd song, be sure to let me know so that I can add it to my external hard drive of songs I love to listen to (is that a challenge or what?)

Again, happy birthday, guys, from a friend across the pond.

It does my own heart good to see the kids staying in touch with one another. They seek each other out, and are supportive to each other. Yep. I couldn't have asked for more.

Thanks Scotty! The boys send their thanks as well.

Debby--It means a lot to me know that they have formed relationships that are independent of their father and me.