This is what I built this morning while the rest of the house slept.  I'll dig out the lower bed later on and fill it with top soil so I can plant more flowers around it. 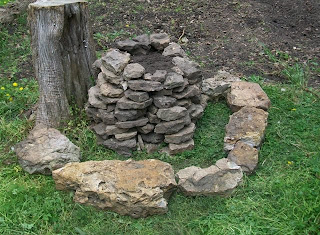 Top view. I sowed Rock Cress  seed inside it. It should bloom sometime in May. 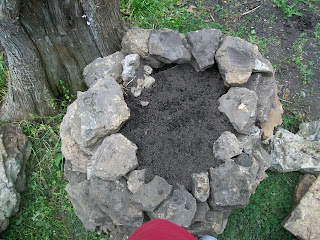 The saga began about two weeks ago when Gary announced that he couldn't find parts for our thirty-something year old toilet and that we needed to replace it.  So we now have a nice, low-flow toilet in our bathroom. But once again we were left with the age-old-question as to what to do with the old one. We could haul it to the dump and pay thirty dollars or so for them to dispose of it in a landfill where it would not bio degrade. Or we could bash it into pieces, put it in a trash bag, and let the trash man haul it off to the same landfill where it would still  not bio degrade. Or we could put it out in the woods and pretend that it doesn't exist--like so many people do.
I hated all of the above options. Wait. Let me think about it, I said.
A few days ago, it came to me. Duh. Red neck flower pot.
The boys were horrified. Mom. You can't. What will people think?
They'll think, "Wow! What a cool looking planter! I wonder how she did that?"  I said.
The looks of disbelief were passed around. I could see them trying to decide how they were going to explain it to their friends. Well, my Mom . . . You know . . . She's . . . well . . . strange.
How on earth are you going to manage that? asked my husband.
Watch.
When they got up and put out their various dogs, they saw it. Two even put on their shoes and went over to take a better look. They are now believers.
And I am very, very sore . . .
at April 17, 2010

What a great idea, Mary - kudos to you for your recycling wizardy.

Can't wait to see the greenery overflowing in the future.

:) And you don't even have to keep the toilet clean!

Thanks guys! It tons of fun. It was even more fun to dig up the flower bed around the base and plant petunias in it today.

Mrs C--That was exactly what I was thinking.