Fifteen year old Joseph returned from camp today. He had an "awesome time". This year he chose to attend a session that focused on playing Christian music and leading worship services (walking in the footsteps of his older brother). The camp director decided that instead of posting pictures on the web everyday, they would sent a CD home with the kids at the end of the week. I kind of missed looking in on him regularly, but the photographer was really on their game. It does indeed look like the kid had an "awesome time".

The challenge course. Note that look of intensity. That's not an accident. He tackles everything with the same determination. 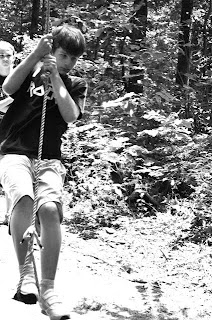 The messy Olympics: If you ever need to get a group of teens who are inclined to take themselves too seriously to relax--give them a "slip and slide" covered in pudding, jelly, and other slippery, sticky substances and make them take turns sliding across it. 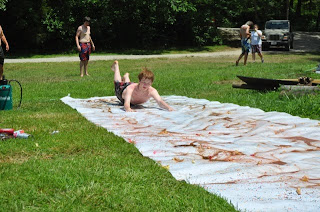 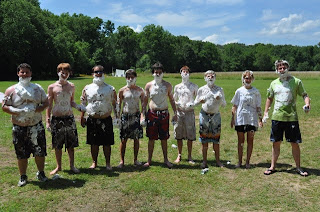 The closing ceremonies of the Olympics included a beautiful hair contest. Personally I think he should have won. 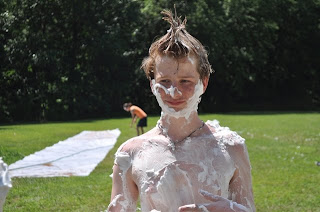 Here is the whole crew all cleaned up and ready for their photo op. In case you need a little help identifying him without all the shaving cream, Joe is the second one from the end on the left (near the dark haired guy). And, yes, we noticed that he had a twin standing next to the blonde girl. 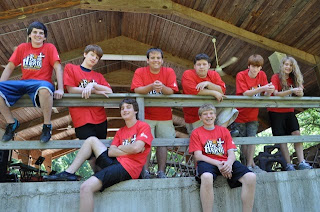 I've heard three times now that he wishes he could have stayed longer, which is the mark of a really good camp. He keeps talking about "getting the band back together" like he's already planning their reunion tour. I just might be in for another four years of live, loud rock music in my living room. Not that I'd mind.
at June 19, 2010

What a fantastically happy time he looks like he had :)
How marvellous for him, big kudos to the people who organised and ran the camp :)

ahhh Summer ~ good times to be had for sure...and here's something to help inspire some summer reading by the boys

Hi Ro! He really did. Yes, the people who run these camps really are remarkable.

Eileen--Thanks! Reading is a given around here. :)