Solomon is slowly slipping away--not so much physically, though his back legs are weaker than they were just two weeks ago--but mentally. He's developed dementia--sleeps all day, spends his evening pacing, panting, staring into space, gets lost in corners, forgets his manners. Caring for him takes some extra energy, but nothing we can't handle. There are still good days, but the bad ones are rough.

Gary has suggested I consider a puppy. Not because there's a shortage of dogs around here, but because he is worried about me without Solomon. I know he'd like to side step the grief and is casting around for something that will help. In some ways I am already grieving. Someone on a dog-discussion board put it well--There's nothing quite like the hope a healthy puppy fills you with. Hope. That's what I was starved for.

Two days ago, on my way home from class, I stopped at WalMart to pick up some odds and ends and ran across a private rescue group with an x-pen full of puppies. I know better than to even look. I am weak to puppy magic. But the day before with Solomon had been especially hard and I found myself drawn involuntarily toward the pen of tiny dancing fur balls. Healthy bodies, gleaming minds. Long futures.

The woman in charge, a  tall leggy blonde with a sweet smile, beamed at me and introduced herself. I told her I was just looking, but asked what they were.

"Chihuahua mix," she replied. A breeder (probably in a panic over the new regulations) dropped them off at an over-full animal shelter so they called her. They were covered with fleas and skinny when she got them (thus the need for regulations). Not anymore.

I am a big dog person. I like German Shepherds, Mastiffs, Great Danes, Collies, and so forth. And I have never liked Chihuahuas--yappy, nervous, tiny.

But I picked up a likely looking candidate with a wiry coat, and buried my face in her fur, blinking away unexpected tears. She nibbled my fingers, sighed, and fell asleep. I held her for a long, long time. Helga and I chatted about dogs (it is great to talk dogs with someone who "gets it"). I watched passing traffic, looked at the tiny little creature in my arms and questioned my own motivations and the ramifications of bringing home a tiny puppy.

There was housebreaking, teething, sleepless nights of puppy crying in her kennel, worrying about what they've ingested this time, and then all the training and me trying to do it all well, plus studying and going  to class. Lots of other practical facts were added to this list and, in the end, I put the little girl back in the Xpen, thanked the lady profusely for the service she's providing, got in my van and drove home to find Solomon having a good day.

Yesterday we stopped at a pet store to pick up some shells for Sam's hermit crabs. The lady who runs this place often places mixed breed puppies for locals for fifteen or twenty dollars. In her cages were three chihuahua mixes. I played with them. They were cute. But, as you know, I do not like chihuahuas much.

Today I stopped again at Walmart and there was ANOTHER rescue group out there. This was a smaller operation. No Xpens full of puppies. Just a few older dogs in kennels and on leashes. Two bigger ones, a serious looking Shar Pei mix and another, a Blue Heeler stood out. A lady about my age with curly blonde hair approached me. There was another woman and two girls who looked to be about twelve.

So I asked--what's his story. (For the record, if you're trying to avoid acquiring another dog. NEVER EVER ask what the dog's story is. You are lost. You are going down for the third time and should just succumb without fighting. You already care too much).

He's part dachshund and part chihuahua, she said. He's eight months old--not an adult, but not a tiny puppy. His owner went into a nursing home a couple of weeks ago. He's housebroken, likes other dogs, doesn't seem to mind the cat, and loves my kids. We talked more--she was a homeschooler. One of her daughters was Autistic. She recently had to put her long time companion, a Collie, to sleep and she was still teary about it. She groomed dogs professionally to pay for her dog-rescuing and she knew the lady whose puppy I'd held a couple of days before and admired her.

I carefully picked him up. He was too sad and tense to pay much attention to me, was polite, but distant, wanting to be anywhere but where he was. Nevertheless, he felt right in my arms, rested his head on my chest, grateful for the any-port-in-a-storm thing, I think, even if it wasn't exactly what he wanted.

But he was not a big dog and he was a chihuahua. And I have my hands full as it is.

I set him down and went back to to the van to find my cell phone so Gary could talk me out of it. All I got was a fast busy signal. Our home phone was off the hook, which meant I was on my own.

I walked back to the lady, startling the little dog who immediately placed his maybe eight pound body between me and the kids, barked fiercely. I spoke and he broke off, his tail wagging. Oh its you.  He asked to be picked up.

As if there was ever any question about it. I was lost.

He rode in the passenger's seat on the way home. About half-way there,  I glanced over at him, his tail was wagging and he was watching me with brown eyes that were beginning to smile. His tail thumped on the seat. I rubbed his head and the thumping grew faster.

Gary (with dog in his lap and a pleased smile on his face--he does like small dogs): I thought you didn't like chihuahuas.

Me: He's part dachshund. In case you missed it, I do like those.

Me (thinking about his bravery in the parking lot): Trust me, he is.


Most of the dogs greeted him happily. Ruby (Daniel's dachshund) surprised me by being really glad to see him (she had not been happy about Zippo and was relieved when he went home). Solomon's acknowledgement was brief, but pleasant, surprising me. He's often tense with newcomers and bears watching for the first few days. Scrappy (Joseph's dachshund-mix) asked him to play. Oscar (bloodhound mix) brought him toys. A puppy, they seemed to say. What a grand idea.

So after a fair amount of debate, we settled on the name, "Clancy." Here's his first portrait. There will be more. 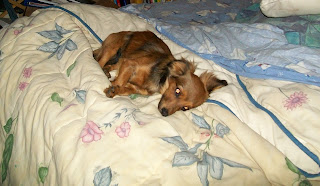 You know Mary, somebody bought the sweetest puppy into the store a couple weeks ago, and for the first time, I found myself melting. I squealed (yes, it's true) and said, "Oh my gosh, that is the cutest puppy I've ever seen in my life! Can I hold it?" And the fellow handed it over where it nestled in, shivering. The fellow had bought it for his girl friend. He was stopping to pick up the dog necessaries for it. He was giving it to her that weekend. It was the puppy's first night away from it's mama and siblings. I hated to give that dog back. It was the sweetest thing. But it would not be fair for me to have a puppy right now.

You tell me that now. You say, "Debby, it would not be fair to have a puppy right now."

I was surprised to learn recently that they intentionally cross chihuahuas and dachshunds. A lady I know has a, "chi-weenie," and swears it's the best dog she's ever had. Congratulations on the new friend. And I'm very sorry to hear about Soloman's condition.

I'm bleary/teary eyed...he will be loved; and it sounds like Solomon is saying 'your in good hands, i can go....' Oh Mary, bless you. ~ Eileen

Anonymous said...
This comment has been removed by a blog administrator.
8:09 AM

I've tended toward little dogs my whole life, but now we have a 97 pound Akbash/Anatolian cross who thinks she's a lapdog.

It's tough to lose a dog. When our dachshund/wire terrier mix died a few years ago, I felt like I was seven years old again.

Have fun with your new arrival, if you can get him away from your hubby!

Oh Debby. I cannot tell you that it isn't wonderful. But I will tell you that taking on a puppy is a lot like raising a small child and you'd be better off waiting until things are a little slower. But an older dog isn't out of the question is it? :)

Dennis--Good to hear from you! Thank you. He is a sweet little guy.

Hal--Thank you. It takes a bit of getting used to--this tiny portable dog that can practically fit in a pocket--but I do like it.