Clancy is settling in and working out the rules. So far he's learned that hiking a leg on the leg of the table is not okay.  Not to believe anything the cats tell him (Isaac and Echo are grounded from TV for a month and they are never allowed to watch Lady and the Tramp ever again). And that I love him very much.

I am about to show you a cute picture. Please do not be distracted by the clutter in the background. It's been a very long week with big tests and an English paper written (Got an A+ on it!), and more to come. So what cleaning I do do--isn't done and won't be until semester's end.

Clancy has never seen a printer before (He was growling) 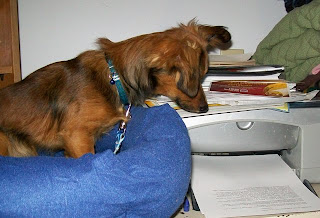 Are you sure it's supposed to do that? 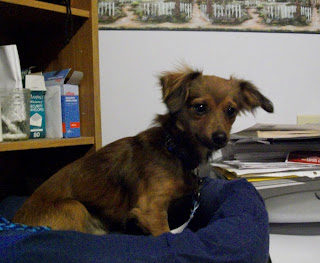 Yes. his bed is on my desk. It is a compromise. He wants to sit in my lap while I work and it simply isn't comfortable. So I cleared a spot and set it up there. Surprisingly, the first time I put him inside, he immediately curled up and went to sleep and now waits for me to pick him up whenever I sit down in front of the computer. I'm thinking of offering him a position as a copy editor.

Tonight Gary and I took him along on our walk. He made it for about a half a mile before he started to drag, which was farther than Gary expected.

He surprised me on the second morning by bringing me a rolled up sock from the laundry and asking me to throw it. He's good for about ten rounds before his attention lags.

Solomon is holding his own for the moment. I get up every morning and feed him, give him his medicine, help him up, and let him outside. He comes back in and goes back to sleep--wakes again for lunch, goes for a short walk around the yard, comes in, etc. The pacing is better since I  put him on a vitamin recommended by another dog person. He is somewhat more alert, but prefers to be left alone (doesn't seem to want me to pet him). I've talked to the kids and have warned them that unless he gets worse sooner,  sometime after Christmas we will probably let him go. They've known for a while that this was coming. I expect it to be hardest on Sam; they are only a few months apart.

Clancy is too funny! Poor Solomon, though. Bless his heart.

Love those little ears. Sorry about Solomon. It's such an awful decision to make, but I keep thinking that if he prefers not to be touched, he must be very uncomfortable.