Family stuff and other updates

All is quiet here at present, unless you count my ongoing battle with the Japanese Beetles intent upon invading my roses, fruit trees, and pole beans.  If you do count that--then I'm at war, in the trenches, with an organic gardening book (a 100 natural solutions to pests and other problems) in one hand and --as of this morning-- a pump sprayer full something they assured me would eliminate the pests "without harming a single beneficial insect" in the other.

Okay, that's not true--they were truthful about it not harming a single beneficial insect. But it didn't harm any of the problematic ones either, least of all the Japanese Beetles. In fact, I think they actually stood up under the spray and caught it on their tiny beetle tongues. I am not giving up though. They may have the numbers, but I've got opposable thumbs. That's got to count for something.

But other than all that, we're all good here. I'm reading a lot--just finished Eragon. And will move on to an F. Paul Wilson novel next (I am so ready for the next Repairman Jack book). I read Beowulf last week and an old Mary Stewart classic the week before (I'd forgotten how that woman could write!) and before that it was a George R. R. Martin classic (Tuf Voyaging--fantastic stuff). And I've got several others waiting in the wings (ranging from Agatha Christie to Pratchett to to Marillier to Niffenegger) . I've got two or three volumes of poetry set aside as well and I keep meaning to get around to read some short fiction to get ready for one of my fall classes, but the call of the novel is just so more alluring.

It's that time of year again, with boys coming and going from camp-- 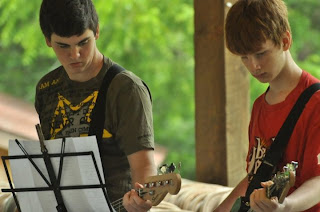 Last week it was Joe at Rock Out Camp (think Christian Band camp).  While Joe is somewhat quieter about it than Jeremiah is, and has--thus far--made no noises about trying to make a living at it when he grows up-- he's our other burgeoning musician. 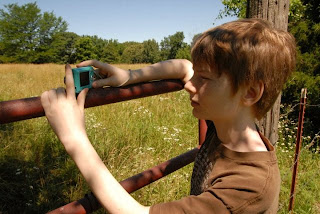 This week Sam's at Photography Camp. One of his counselors posted this picture of him yesterday on their Facebook page. This is Sam, obviously trying to line up a shot. I can't wait to see the results.


Daniel has moved on to more grown up things this summer, in the form of a driver's permit and his first job. He's following in Jeremiah's footsteps (often carpooling) to the local grocery store where they're keeping him busy full time so far. He's coming home exhausted, but happy--seeming to have thrown himself into the whole working man thing better than we expected. No word from him about college yet, but I remain hopeful.

Jeremiah's band recently acquired a business manager and are playing regularly--even making money at it once in a while. He's become the third adult in the house of late and some days I don't know what we'd do without him (though I expect to do so soon). He's stepped up to the plate on household repairs, taken his younger brother to camp, helped buy a birthday dinner for one of his brothers when money was tight, and is his Dad's (I suspect much needed) best friend. Though I sense (and understand) that he would rather be making music full time, he's returning to college this fall to complete his degree in computers.

As for The Dog Story--I'm one chapter ahead of you in my writing and would like to keep it that way. So hang on while I write another chapter and then I'll show you what's next. There's a pretty sharp increase in excitement from this point forward and I confess that even though this project "doesn't matter" in the sense that I am not worried about perhaps marketing it to someone other than you guys and my family, I am fretting about the pacing because I like to get these things right. But it is nearing the end and I"m pleased with that.

Wow, Sam especially is really growing up. Hope your summer really is great. Japanese beetles look really cool but I wouldn't want a big batch of 'em in my yard either.

Hello HEM. Yes he is--too fast. Thank, you too.