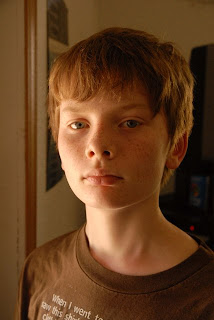 As I mentioned recently, Sam went to a photography camp last week. When he returned yesterday he talked incessantly about the professional photographer who helped staff the camp and gave the kids the benefit of the years of his experience. Why a man who travels all over the country as well as overseas taking pictures would choose to spend five days at a summer camp with a group of teenagers teaching them how to snap off a few shots of wildflowers, dragon flies, and each other, is something I'd like to ask him some day. I'd also like to thank him.

Sam has a whole portfolio of pictures that I'm sure he'll share with you over on his blog when he gets around to it. But I have pictures of Sam I want to share here, courtesy of the camp CD sent home so parents can see what they're children were up to. This photographer didn't spend all his time teaching--he spent a fair amount of it taking pictures of the campers. For once I didn't have to spend my time squinting at pictures hoping to catch a glimpse of my kid in the back of the crowd. This guy was good. 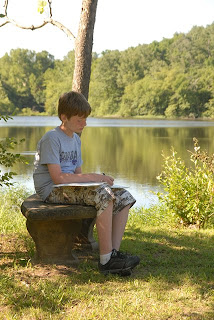 Every morning campers are sent off to journal and read their Bibles for thirty minutes. 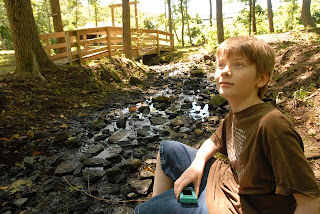 Sam really liked this bridge; it's in several of his pictures. 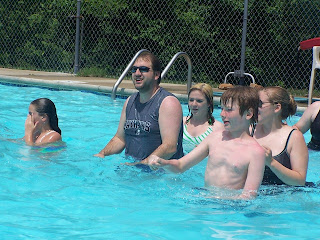 White Bread there in the middle, now known as Lobster Boy, had been ordered to wear a shirt while swimming as there is no sunblock known to man that's strong enough to prevent a Paddock from burning. For some odd reason, he didn't think I'd find out.


This is known as an epic slip-n-slide. 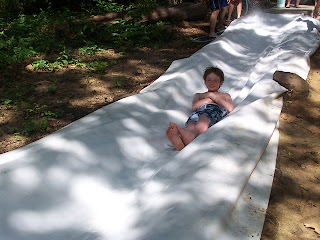 Makes you wish you were a kid again, doesn't it? 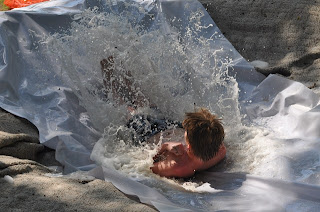 Challenge course activity. They're about to cram him through a hole in the net. 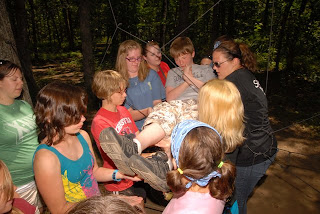 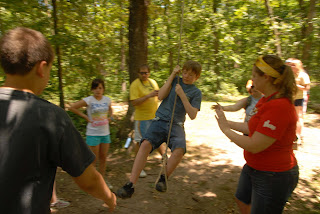 Any long time readers remember the kid from a couple of years ago who stood at the edge of the "mud pit" at camp refusing to get dirty until a little girl talked him into joining the others? As you can see--he's gotten over his hesitation. 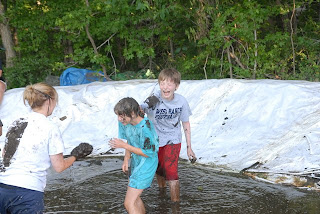 Sam mentioned in passing that the photographer once told him to think about what God wanted for his life as he looked into the lens of his camera.

So do you know what God wants for you? I asked him, half expecting him to announce that God wanted him to be a photographer.

He ducked his head a bit. Yeah.

What? I didn't think I heard him right. 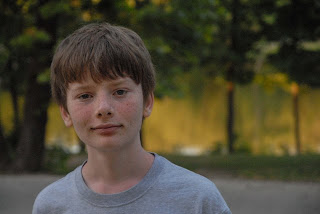 I said, I think he wants me to be a minister, he replied.


He talked on a bit about how he'd do it and stated that he was pretty sure he'd need a full time job too and that he thinks being a pharmacist would tie nicely into the ministry.


I thought about this conversation a lot as I uploaded pictures to my hard drive today and I kept coming back to this particular shot. And all I could think was That freckled face, a minister someday? My sunburned, lately "can't be told anything he doesn't already know", almost thirteen year old son?

WTG,Sam, glad to hear you had a good time.
Mary, I can't see all the Facebook pics on my cell phone so I'll check them out when I get home to my PC...

Mary - I soooooo see you in Sam! What a bright wonderful child! I know you're proud of all of your boys - they are exceptional young men.

Scotty--I'm really pleased that you've taken time to look in. I can't wait to see all the pictures you've taken of Exmouth. And the new tattoo? :)

Cousin Jan! Hello! Thank you for stopping by; you really made my day. I do think there's a bit of a resemblance there, though he doesn't talk as much. :)

It's neat to watch your children 'become'. Sam, I think that you would be a fine minister.

Deb, I think he would too. And yes, I do love watching them grow up.