This is Story. She is half German Shepherd and half Catahoula (or Australian Cattle Dog--there's some question about that). And, yes I have lost my mind, thank you very much. 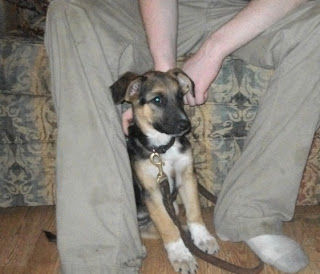 We were just going to look--I've done this hundreds of times over the years and I handed the puppies back without hesitation. First I held another puppy from the same litter, and she was lovely, but distracted and unhappy in my arms. And then I held Story and she was calm, thrust her face into mine, and nuzzled me with quiet curiosity. And rubbed my face against her fur, and she smelled like Solomon (who never, ever smelled like a dog--just himself) and I wound sitting in the van sobbing. Gary said, "Do you want her?"

I stared at him disbelievingly through my tears.

He sighed. "Give it an hour. Compose yourself and think it over. If you still want her, we'll go get her."

The woman--a homeschooler like myself--just beamed when we returned. All the other puppies were gone. They'd held her back for me because she was the woman's favorite and she wanted me to have her. She hugged me when she handed her over and thanked me.

Clancy is--surprisingly--thrilled. He brings her his toys and watches as she plays with them. She is too big for my lap so he doesn't have to compete for that. It will be several months before she'll be strong enough to tag along on our morning walks so he doesn't have to share that either. And the bed--well as she is ten weeks and already twenty-one pounds, something tells me she won't be sharing that either.

She rock solid calm, playful but not hyper. Quick to catch on to what we want and loves everyone in the family. I am extremely pleased that she's not showing any signs of needing to be the boss of anyone. 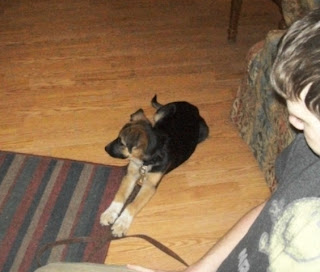 Vacation pictures to come. This just sort of seemed more important.
at September 16, 2011

Nice-looking dog, Mary - glad to hear you've both found a home in each other.

Thanks Scotty. Yes. Two hearts have found a home.

Pencil Writer--Thank you. She does seem to be a good fit.