The semester came to a strange end--with me tagging along with Jeremiah on his last day at his own campus and then driving me to mine for a final in a Critical Literature class. (By the way, any time the 23 year old whose job it is to deliver you somewhere on time tells you that he "knows a short cut" you have to acknowledge that your day took a wrong turn somewhere. And, yes, I meant every word of that pun).  I walked in to my final quite late and was braced for the professor (a favorite) to tell me that she was sorry, but rules were rules. Instead she waved off my explanation with a chuckle and handed me the test to take. Jeremiah and I had an uneventful drive home, talking about all things small and large. I must repeat myself here: He has grown into a fine man and not only am I proud of him, I genuinely like him as a human being.

Jeremiah graduated on Saturday. Though he rejected the idea of receiving his diploma publicly, he did celebrate with a group of fellow graduates and friends and didn't get home until after two am. As I understand it, he had a fantastic day (swimming, eating, and going to see the new Star Trek). We plan to celebrate as a family after pay day and he's happy with the idea of having yet another party.

However, as those of you who follow me on Facebook know, we lost a dear long-time member of the family on Sunday morning. I have mentioned Oscar here more than once over the last seven or eight years and by now I think you all know that: 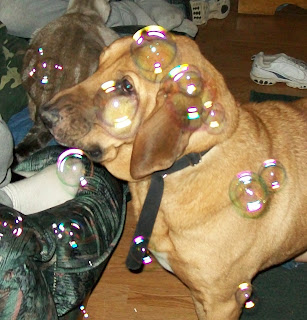 Puppies (the blur is Zippo, a visiting puppy), 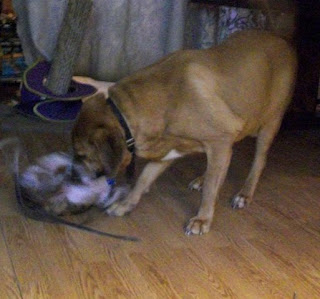 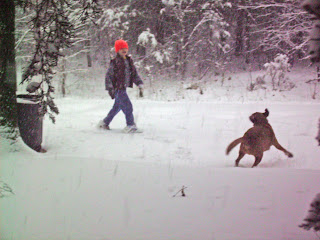 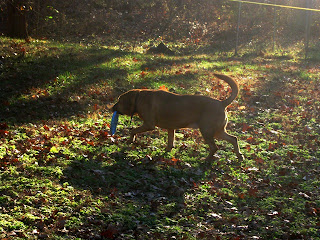 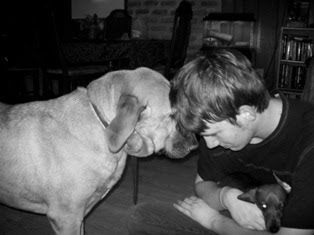 But his favorite thing in the whole world was his boy. Nothing even approached his devotion to him. 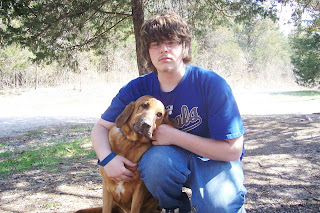 Oscar will always be with us in spirit and in memory, I am sure of this.

Oscar's devotion to his boy and his courage when it really mattered were why I chose to include him as one of the three "co-stars" of The Way of things. (a children's story chronicled on this blog a couple of years ago). Oscar was the Hound. It was surprisingly easy to imagine him as a "castle guard" of sorts because the dog we knew would most certainly have done exactly what the Hound did.

The Hound was deceptively fast—his cavernous jaws closing around every attacker, crushing them and moving to the next. He battled in the shadows, baying in fury and pain as he struck and was struck. His red-gold coat glowed in the dim light as though he was on fire.


Though the story will probably always remain too personal a tale for the rest of the world to truly appreciate (I really think you have to know the real dogs), it does illustrate (metaphorically of course) the hugeness of each dog's impact on our lives and how we see them. Oscar was portrayed as brave and loyal because he was both. But more than that, he never missed an opportunity to express his feelings for us.

We should all leave such a legacy behind.

When 'Salina's father died, we explained that when someone (and animals are someones I think) dies that we have loved, they will always be alive in our hearts.

Congratulations on finishing the studies - for the year or for this course?

Thanks Jeanie. For the year. I have three semesters to go. :)

We miss you. Hope you pop by with an update soon. xx