We had a terrific time--once we got there. Gary was just sure he knew right where Mansfield, the town near the festival, was located.

It was supposed to be a two hour drive. After over three hours of traveling, I suggested we ask for directions (I NEVER do this. I am usually the one who is reluctant to ask). Gary more or less agreed.

Much to his delight, the only gas station in the small town was closed so we had to go to a big touristy candy store--one of those with a huge splashy red and white billboard designed to be seen from the freeway. This one advertised homemade chocolate and international candies. He was like a--well you know the simile . . .

However, his enthusiasm was quickly dampened by the no-nonsense manager (probably on the down side of a sugar crash) who told him you couldn't get to Mansfield from the highway we were on. That we were going to have to take a no-name state highway and intersect with another no-name road which would lead us to our destination. And it would be another hour of driving. By this point, we'd been in the car since noon and I was very ready to get where I was going.

The no-name highway wound through some beautiful country--rolling farms, old homesteads, lots of forested properties. So all was not lost--just us.

When we finally found our way to the festival, it was late afternoon and we decided to set up camp and wait until Monday to actually attend. The "camp grounds" were actually a cow-pasture that had clearly contained real live cows relatively recently. The nearest toilet facilities were several hundred yards away in a porta potty and we had to go to the barns to pump our water. I shall recommend that they add the word "primitive" to their description of their "campsites available" statement on the web page. We're good campers though and were undaunted by all of this.


The view from our camp: 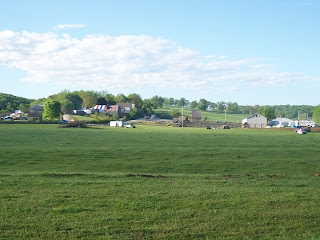 We found our way to an empty spot along the fence line between numerous other campers and set up the tent. We split a small steak and ate some salad, drank some wine, I read to Gary from a James Patterson paperback, and we retreated to our tent when it got dark.  The sky was beautiful--stars deep and wide, crowding the night. Though not muddy, the ground beneath our tent was soft with a recent rain.  About three camp sites over was a family of musicians (presumably from the festival) who were playing gospel tunes and singing in beautiful harmony. We expected a good night's sleep.

My famous last words before leaving home were "Let's just skip the air mattress this time and "I think four sleeping bags should be plenty for two people who want to cuddle" (punctuated by a meaningful smile). I packed the sleeping bags with the thought in mind that we could use two for lying on and two for covering up with. It so wasn't enough. I don't know what temperature the rest of Missouri was, but I can assure you in that pasture that night--it was sub-zero degrees. And that "soft ground" did nothing but get harder and harder as the night wore on. We found tree roots (tree roots! in a field!) and more rocks with every turn. The romance of the situation was pretty well curtailed by demands for cover by the person who had just been uncovered by the other person who had (supposedly by accident) wrapped themselves in all the covers. By 1 AM the musicians (who I am sure were sleeping in heated tents on air mattresses) had gone to bed. I was desperate--put on a second sweat shirt, donned a second pair of socks, put another pair on my hands, and I still shivered. We gave up on having two sleeping bags beneath us and covered up with a third, artfully arranged our torsos around the rocks and roots, wrapped our arms around one another, and finally dozed some just before dawn.

Lack of sleep or no, I was wide awake at 6:30, listening to the birds, to cows lowing in the distance, to our well rested neighbors stirring around their camp fires and talking in hushed tones. Gary woke too, we made coffee, puttered, broke camp, and went to the festival.

It was beautiful day and from the moment we entered the gates we were surrounded by air that fairly vibrated with goodness. 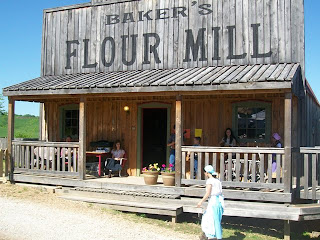 --but was greatly disappointed to learn that the only baked goods they served were vegan and he was just sure their sweet rolls would be little better than stones and about as tasty. However the fresh out of the oven cinnamon roll the woman handed him was huge--soft and fluffy with a terrific icing on top. Those kids on the front porch were playing and singing folk music. We sat at a picnic table, sipped coffee, and listened happily while Gary ate his sweet roll (with a little help from me).

We attended a talk entitled, "Why we garden" given by a brilliant young botanist  whose mission (I'm pretty sure) was to make you grab the Baker's Creek seed catalogue and order every  flower he mentioned. After viewing his slide show full of beautiful plants, I suddenly wanted flowers--lots and lots of flowers. While he talked philosophies he also educated the audience on a wide variety of both wild and easy to grow cultivated plants. I left his talk feeling a lot better about my own somewhat haphazard landscaping. It seems there are no rules to this gardening thing. It's wild and woolly and whatever makes you feel the best as you trod out into the morning light in your bunny slippers, clutching your cup of coffee, and talking to your plants, is right and beautiful. He once referenced plants "dancing and singing" in certain locations and I was relieved as I thought I was the only one who heard that music and saw that footwork. 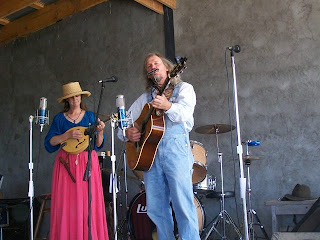 It was everywhere!
We moved deeper into the festival and found a whole row of shops and tons of vendors. 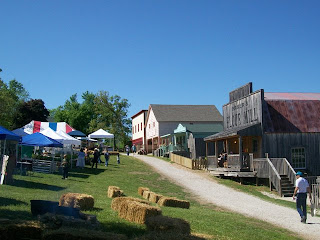 At the top of the hill, in the red and tan building was an Asian Restaurant that served vegetarian food. The charge per plate? Donations in the donation box by the door. Lunch was so good we put more money in afterwards.
The pink building next to it was a seed museum. Just inside the entrance was a pair of lovely old ladies, one playing an auto harp, the other strummed something called a "chorded zither" or table harp. I was amazed to find myself tearing up when the lady who played the table harp sang "Edelweiss" in a high, sweet voice. (Gary told me later that it caught him off guard as well). Upstairs was bits and pieces of history, ranging from ancient seed catalogues to antique incubators, to old gardening tools.
The green building housed an apothecary with shelves and shelves of dried herbs and an herbologist, a young African woman with beaded hair, was handy to answer all our questions.
Across the square and behind the vendors-- and not shown because I got too distracted to take very many more pictures--is the biggest seed store I've ever seen. I could have purchased tons of seed, but managed to make myself stay focused on my mission and only bought nasturtium seed.  Next year, though, I will know where to go before I've spent all my money at other businesses.
The plant vendors were friendly to a fault. As it turns out, gardeners are a talkative crowd, and very happy to talk shop, make suggestions, and encourage. One elderly gentleman, with bright blue eyes, crisp striped over-alls, and a serene smile told me, "Gardening is an adventure and should never be boring. I've been doing this for most of my life and am still trying out new varieties of plants and testing theories. When you find yourself losing interest, order some new seed, rearrange your space, plant something that's difficult to take care of. Learn from it."  I could have listened to him for far longer, but Gary was waiting for me at the restaurant.  Charm may be the only human quality that does not fade with time.
There were two or three bee keepers there. We chatted with a man who'd brought a full hive with him (in order to illustrate the usefulness of his long, triangular hives. He'd blocked the entrance, but had a few escape anyway and they buzzed around him as he talked. His ten year old son casually caught a bee to show to my husband. James of Bee Landing offers workshops and isn't too far away from us so we collected his form and plan to attend. He also had honey traps to catch wild bees with which I thought was a stroke of genius and probably beats the heck out of climbing up trees after them (Hi Dennis. :) ). Frankly, I've been wondering if wild (native) bees wouldn't be a good investment, but I've still got some questions about this.
Finally, at four-thirty, we concluded reluctantly that we should go home. With us, we carried memories of a great day, a new-fangled planting chart, two different kinds of tomato plants--one called Peaches and Cream that grows yellow tomatoes--and another called "white beauty" which grows white tomatoes (which can be turned into a terrific white tomato sauce!), two "bird house gourd" plants, nasturtium seed, and two catalogues--one for me and one for my Mom. The damage could have been worse.
All in all, it was a fine, fine day. The only bad thing about it that it only comes once a year.
at May 04, 2010

OK, I'm here in Oz, with a rural town in the mountains called Mansfield about 3 hours drive from my door wishing there was something similar held here!
It sounds wonderful (not the subzero temps or the rocky campsite - pack a hot water bottle next time!) but the bees(native bee keeping is the way to go)the flowers, the seed savers...!

I've been thinking that, "Use enough ladder," would make a good title for a book :-D

How gorgeous. I have a 'Mansfield' over here, but it's suburbian jungle :)

Dennis-I think it would be a great book title. :)

Rhubarbwhine--Good to hear from you. Mansfield is a pretty area--so much so that I'd consider relocating to it.